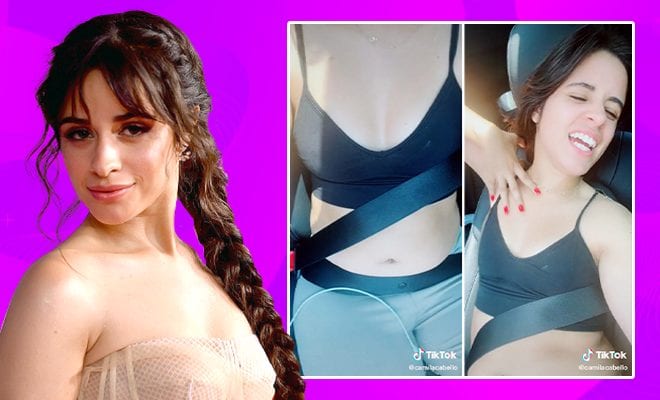 Señorita Camila Cabello has something to say, and it is aimed at all those who indulge in casual body shaming of celebrities, who they believe must look 100% made up and fabulous, all the time. And the message is, get real, people. Because real women come in all shapes and sixes. The 24-year-old singer and former Fifth Harmony member posted a video on TikTok where she was out on a run, with her bare stomach exposed in a way that wouldn’t go down with the prudish keepers of the current ridiculous beauty standards of this vain industry.

Panning the camera to show her workout outfit—track pants and a cropped black top, Cabello says, “I was just running in the park minding my own business trying to be fit, trying to keep it healthy. And I am wearing a top that shows my belly. I wasn’t tucking it in, because I was running and existing like a normal person that doesn’t tuck it in all the time. And I was like, ‘Damn.’ But then I reminded myself being at war with your body is so last season.”

Camila Cabello really coined a line here with that last bit. It is indeed very much not en vogue to be so overly critical of one’s body or body shaming others. She goes on to say that she loves her body, as she croons ‘Something He Can Feel’ by Aretha Franklin while running her hand over her exposed tummy to once again reiterate her point.

“We are real women with curves and cellulite and stretch marks and fat. And we got to own that, baby,” she says. And ain’t that right? When we see younger celebrities talk so positively about their bodies, it proves just how far we’ve come in this conversation about our bodies and the efforts to reshape the narrative to make it healthier. It’s not yet the end of the road, but the fact that young women and girls now have so many role models, particularly women of colour like Camila Cabello, Jameela Jamil and more, to look up to, is definitely a big deal.

Let me tell you about something ridiculously funny. Fat people (and I can say ‘fat’ because I am, in fact, fat people) often get conscious about the way they are photographed because, to quote Monica Geller, the camera adds ten pounds. So we pose hiding our flabby arms, our tummies tucked in, and standing at one of the few angles where our double chin is not visible. Oh and we never ever take a picture while we are seated, and if we absolutely have to, there’s always a table or a pillow blocking the paunch. The camera angle has to be top. And yes, we do have a good and bad side. As you can see, it can be exhausting for someone who is conscious about their body to even get a basic photo clicked.

But the funny part is that if we do all of this and click a photo where we look gorgeous, we are also accused of hiding our true selves. And no, I am not making the up. I’ve been told by many how I “don’t look fat in your photos” which isn’t exactly a compliment because there’s the slightest hint of accusation in the tone, suggesting that there was some major misleading happening here.

The reason I ventured to share this with you is because it is absolutely impossible to please anyone and everyone with the way you look. All that matters is how you see yourself, and whether you are at peace with it. Real women have flaws and while it is absolutely okay to want to flaunt your flaws and not have to cover them up all the time, it is also, at the same time, completely okay to want to keep them under wraps and work on them.

Especially for celebrities, who are in the business of looking good, it can be particularly difficult to shun all vanity and let themselves be photographed not looking their best. Because while we do acknowledge the problematic beauty standards of the industry, until they are dismantled by the society as a whole, we cannot expect every celebrity to let go of them. It’s like saying, “Hey, you have a problem with your workplace? Then go ahead and quit your job.” Not everyone can, because their livelihood might depend on it.

So then, what’s the best way to tackle this situation? Well, that would be for us, the people that add weight and relevancy to these ideas of body shaming, to dismiss it completely. The message that Camila Cabello shared about body shaming isn’t for the media or the paps who photograph her unflatteringly. It is for the people who see these photos and troll women for having real curves and cellulite, forgetting that even if these are celebs, they are in the end, regular men and women, and have the same issues and concerns that we do. So if they choose to own their bodies, then we must celebrate that.

As long as we get the message, it would be a better, easier world.

5 Movies And TV Shows That Portray Fat Women Or Different Women As Ugly. This Needs To Stop