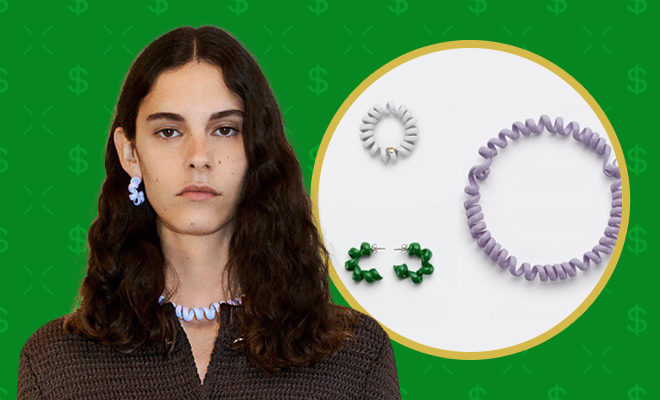 I’ll be honest. After writing close to a dozen articles about how luxury brands dupe us by selling the most redundant and ridiculous household items for a huge amount, I thought I won’t be surprised anymore. However, these fashion giants have a special talent of outdoing themselves. From Moschino’s baguette bag to Balenciaga’s blanket bags that were eerily similar to the bags desis keep their ‘kambals’ in, there have been numerous such instances where a high fashion brand slapped a hefty price tag and sold as ‘fashun’. Just when you think you’ve seen enough, I mean enough to make you gasp, a new launch pops up which makes you rub your eyes in disbelief. This time, it is the Italian fashion house Bottega Veneta that is selling coiled necklaces. Doesn’t sound so bad, does it? Well, it looks exactly like the telephone cords, coloured obviously, which is being sold for $2000 or 1,45,000 in INR.

It was the fashion watchdog Diet Prada who brought it to the notice of everyone by posting an image of coloured telephone cords and the Bottega Veneta necklaces which were strikingly similar. The necklace pieces are made with powder-coated sterling silver and come with coiled earrings. There are three colour options, green, white and blue. The brand seems to have drawn the inspiration for these necklaces from the most random of places, the junkyard. Those landline phones with a long coiled cord have nearly become extinct and while it’s good to recycle and reuse, we’d appreciate not being deceived into buying something totally random in the name of high fashion.

Also Read: Moschino Has Introduced A Baguette Bag And We Don’t Think We Knead It

People in the comment section were either in splits or furious about the audacity of the high-end brands coming up with the most absurd things and asking for a bomb for it. A user commented, “They are really just reaching into the junk drawer eyes closed and slapping 2k on whatever comes out.” Another user wrote, “I made my mom this same bracelet for Mother’s Day when I was like, 6.” Some even liked the necklaces (probably Gen Z who won’t find it weird but interesting), however they still refuse to pay $2000 for it. A user commented, “I have to say I actually like the concept but would never in a million years pay more than like $25.” Yeah, I agree. I don’t think I will ever have the nerve to spend that kinda money on a necklace which I can probably DIY for absolutely free. Or to put it another way, my mom will disown me if I bought it.

Here’s what I’m gonna do. I’d pull out my landline from the junkyard in my house, cut the cord off, spray paint  it in a nice colour and tell everyone it’s Bottega Veneta. That way, I am recycling an old piece of junk and turning it into a trendy necklace that looks exactly like the designer jewellery and saving my precious pennies on it. Follow me for more such DIY hacks.

Also Read: Gucci Introduces Grass-Stained Denims At A Ridiculous Price Of 1 Lakh. This Isn’t The First Time Gucci Has Done This