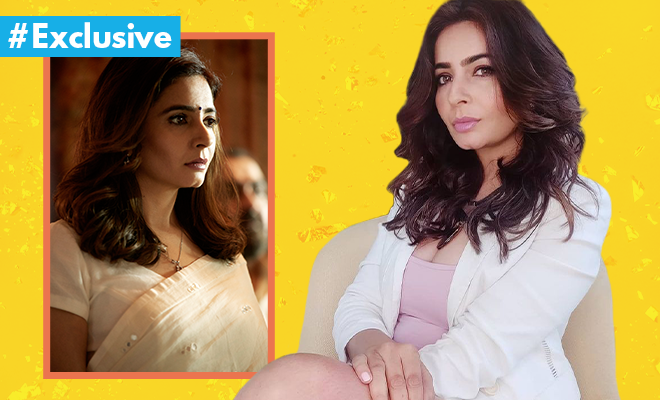 Shonali Nagrani Says The Women Of ‘Tandav’ Are Strong Without Losing Their Femininity. Finally!

The year may have changed from 2020 to 2021, but for OTT, it’s no biggie. Because, as work and shoots resume to normalcy, the gold pile that filmmakers and studios have been sitting on is about to be unveiled! Amazon Prime Video, having had a stellar 2020 with the bloody politics of the badlands in Mirzapur 2, is all set to begin 2021 with a similar bang. Its political drama, Tandav, is more posh, urban politics set in the capital city of Delhi, and the stake here is not monarchy but leadership of the world’s largest democracy. It’s all set to drop its first season, of nine episodes. And if the trailer is anything to go by, it promise to be a delicious binge. You could say the show is headlined by Bollywood names like Saif Ali Khan, Dimple Kapadia and Mohd. Zeeshan Ayyub. But the ensemble cast is truly a trove of talent.

What I am particularly excited about are the female characters of Tandav, because with so many women on board, there’s surely going to be range in portrayal! I had to know more, and so I spoke to Shonali Nagrani, who plays quite an interesting character in the series. With her ongoing stint as a cricket anchor and her international fame as the face of the viral “Pooja, what is this behaviour?” meme from Bigg Boss, she’s already conquered 2/3 things on India’s coveted popularity list. With Tandav, she forays into politics, well, a fictional world, but with no less drama!

Q: Tell us more about your character, Aditi Mishra.

Shonali: My character, Aditi, is a single mother and was the first female fighter pilot of India. She has decided to leave that world and Samar Pratap Singh, played by Saif Ali Khan, gets her into politics. So there’s this battle of who becomes the PM, and Aditi is up for the cabinet post of Defence Minister, depending on who wins. Naturally, her allegiance is towards Samar, because they both have a history together.

Q: How was the experience of working with Saif Ali Khan and Dimple Kapadia?

A: Damn, it was so scary!  We started off with a very big scene, and there were some 800 people in the room. Then Dimple (Kapadia) Ma’am walks up on stage and starts talking; and she is a lethal actress, a force to reckon with. She adjusts her pallu, her glasses, sets herself up calmly, and then she delivers her monologue, which is flawless!

Now I’m looking at our director and hoping Ali (Abbas Zafar) does not call me to be the next person after her because I do not want to follow Dimple Kapadia! But sure enough, he does! I had to walk on stage and follow Dimple Ma’am and the person sitting right in front of me while I’m delivering my dialogue is Saif Ali Khan. And my head is spinning! For a minute, I wanted to run back home!
It’s my first major acting gig and my first act is following someone like Dimple Kapadia, with Saif Ali Khan sitting in front of me! In retrospect, it was the most memorable moment for me, but at that point, it was rather scary because of the amount of pressure you put on yourself. There are so many seasoned, veteran actors in the cast! But ultimately you conquer all that and give it your best. And when all these actors settle in our roles and come together, it is magic.

Also Read: Tenet Review: Nolan’s Most Mind-boggling Yet. But Dimple Kapadia’s Act Goes Down So Smooth!

Q: Tandav is clearly a serious show, but was the atmosphere off screen as serious with such a huge cast on board?

A:  Well, if you have Sunil Grover on set…! Saif also has a mad sense of humour, and I like to be a little prankster around as well. Having been a host on television for so many years, it’s like muscle memory to want to lift the energy up. So I think between all of us there was never a dull moment! The atmosphere was so relaxed, and a lot of that begins with the people at the top. If a director is relaxed, everyone is relaxed on set; if they are stressed, then the stress passes on, like a domino effect.
There was a lot of harmony on set because everyone came prepared with their lines. No one forgot a line, not even once, and you can see how massive the cast is. There are many, many more actors that you don’t yet see in the trailer! But it all came beautifully together because our director and producer, Himanshu Mehra, were not sitting around stressed. In fact, after shooting, everyone would go to the gym together and workout, or hang out in someone’s room, even go shopping.
We actually played cricket in Pataudi, where Saif Ali Khan was captaining one team and Ali Abbas Zafar was captaining the other. I was the second umpire and making important decisions on the field, which was a major power trip for me!
In our industry, people wear masks a lot to hide their true selves. But on the show, everyone was their authentic self, which gave each actor this security. And you’ll see how all that translates on the screen.

Q: A show on Indian politics would naturally borrow a lot from the real political climate of the country. How does Tandav portray the women in politics?

A: Here’s what I feel is a big differences between the women in our show and the women IRL. Let’s be honest about it, politics is a man’s world. It’s a dirty world where it is hard to trust people around you. And hence, it is a field women tend to avoid. But when they do enter this field, they tend to become like men because for the men to treat them with suspect, they have to lose their femininity. They have to lose the essence of being a woman. Otherwise the man would not respect the woman. In Tandav, what I love about my character is that I am a powerful, fiercely ambitious woman, but that doesn’t mean I lose the essence of being a woman. I still wear my floral sarees and pastel colours. I don’t lose my femininity. And that’s not just me; it’s all the women in the show. We are owning our femininity.
And why shouldn’t we?  We can still be ambitious and do whatever we want and still be a woman. It’s not just in politics but in the corporate world as well. So for me, being a feminine politician was a very attractive thing and I think that’s what women in our country need to realise—don’t lose being a woman to fit it.

Q: Did you seek inspiration from any real life female politician or women in defence for your role? You come from an army background yourself….

A: Yes, my entire family is from the Defence field. My grandfather was in the Navy, my other grandfather was in the Indian Army and so was my father. In the show, I become a candidate for the position of Defence Minister, since I am an ex-airforce fighter pliot. But the Defence is very different from politics. Defence is very fair, honest and transparent; politics is the exact opposite of that. So how does my character go from that very fair, transparent world and unlearn all of that to foray into politics is interesting.
It’s the exact opposite of everything she’s done so far. She’s also a single mother, so she has got to be tough. There’s a lot going on for my character, emotionally, because she is struggling to fit into this world.

Q: Being a show about politics, there’s a chance that it might ‘offend’ some people or ‘trigger’ some trolls. Were y’all particularly conscious about this when shooting?

A: I guess, there were a few, and we made a few changes here and there. Because the idea isn’t to offend anyone. The idea is to make a good show. And every show is has to take inspiration from real life stories. You can’t create something without any inspiration coming from something in the past.
However, I also feel that people have become way too sensitive these days and quite reactive. We have a lot more time on our hands now, and there’s always someone who wants their 20 seconds of fame by trolling or becoming a hater. So, I don’t think we should stop people from making political or religious shows because they might offend someone. The idea is to entertain people and we hope they just take it like that. But in the end, those who want to make an issue, will still do that.

Q: Okay, I have to ask you this. How does it feel to be the face of one of the most viral Indian memes? Because “Pooja what is this behaviour?” is everywhere!

A: *Laughs* So, you know, I recently learnt that someone dressed up as me for Halloween! It was all very embarrassing initially, because this is one story from Bigg Boss House that I never wanted to be remembered. But now I’m loving it. I’m really enjoying it and I’m loving the idea that it’s become so popular. I read somewhere that it has become the second most famous meme in the world! People keep sending me their memes and renditions of it. So I do plan to have a contest very soon. I don’t mind having a panel of judges and give away prizes for this!
The universe works in mysterious ways! Honestly I had no idea that something from 2012 is would after all these years become such an epic moment. I’m glad that it has made so many people laugh and something good has come out of it!

Q: With OTT offering up opportunities galore, do you see yourself doing more web series and fictional content now?

A: Yes! I’ve already shot for one more, Sunflower, which is a dark comedy with a similar ensemble cast, quite different from Tandav. I also get consultation assignments for Miss India and I am a viral meme, so I like having my hands full and dabbling in everything! You know, it’s taken me 14 years to actually start getting into acting. It has been a very very long patient wait for me and I cannot be thankful enough to Amazon Originals, Ali Abbas Zafar and Himanshu Mehra for giving me this gig on such massive platform.
Tandav will begin streaming on Amazon Prime Video on January 15, 2021.