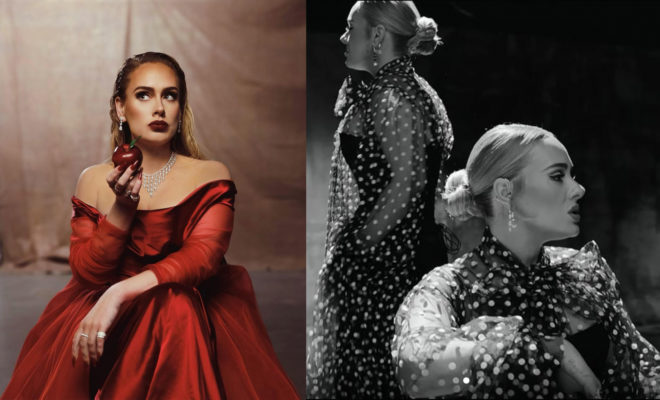 Adele’s ‘Oh My God’ Music Video Is A Moody, Glamorous Mess And We Can’t Help But Love It

Adele has finally released the ‘Oh My God’ music video, which is the second song from her hit album 30. And boy, it’s grander than ever. Donning the snow-white cape and a fierce smile, the music video mirrors the events from her personal life. A glamorous tragedy, if I may say so, the close to four-minute-long video oozes theatrical magic, which gets you in the feels. Featuring herself, Adele to me has always been a star with a purpose. Setting a tone apart from her fellow pop icons, the musician has many a time reiterated, “If everyone’s making music for the TikTok, who’s making music for my generation? Who’s making the music for my peers? I will do that job, gladly and rightly so.” Amid the rat race of chasing stardom and not pursuing the craft that brought you under the glimmering spotlight, Adele nurtures her being, which is still more of a singer, than a legendary star she embodies. And doing so, she has us awestruck with another musical narrative that takes the listeners inside some unversed chapters of her life. While she manages to not butcher her latest song ‘Oh My God’ in a wordly fashion, she reportedly mentioned it being the “first time that I basically left my house after my anxiety and stuff like that started to sort of subside.”

The song opens with the infamous chair that reminds you of her 2011 song, ‘Rolling in the Deep,’ with the camera sliding on Adele who features in a beautiful gauzy pussy bow, polka dot blouse with a dramatic twist in velvet flocked tulle teamed with a black skirt from designer Harris Reed’s bespoke Fluid Demi-Couture. Sprinkled with the old-world charm, the black and white dots, set the tone of the style palette that strengthens the deep bond between music and fashion. Wearing a similar flouncy silhouette are the dancers that take the centre stage with lyrics, “I know that it’s wrong, But I want to have fun,” projecting balloons and happiness galore, until it turns into a top shot of a fainted woman.

The song encapsulates a plethora of emotions through almost a hundred chairs of all kinds–broken, flowery and at times set on fire, happy dances, and a horse as well. Bringing timeless designs to life, Adele’s second appearance has her in a cheongsam-esque attire by designer Nicolas Ghesquière. Styled by Jamie Mizrahi, the brocade long gown, comes paired with a white cape, black leather gloves and a befitting retro hair flip, which presents Adele’s all-new style, post the release of the album 30.

With lyrics, “Maybe baby I’m just losing my mind, cause this is trouble, but it feels right teetering on the edge Of heaven and hell. Is a battle that I cannot fight” supported by visuals of breaking out, with the camera swiftly focusing on Adele again, who takes the seat in an alluring piece from Vivienne Westwood. The off-shoulder number is accessorised with a Cartier necklace and reminds me of the first image that she shared on Instagram with an apple in her hand, announcing the single. The frame fades after Adele takes the seat and bites the apple which plays as the second lead in the video.

Directed by Sam Brown, who also worked with Adele for her 2010 music video ‘Rolling In The Deep ‘Oh My God’ uses symbolism through a series of black and white frames that unravel a tale and breaks through the piled up pain. Bringing timeless designs to life with the tulle grandeur throughout the three looks, the fifteen-time Grammy winner unleashes her brand new self. With speculations suggesting the song is about her relationship with sports agent Rich Paul, the singer duly owns the mess with ease. And ventures into love and loss, post her divorce from husband Simon Konecki, in 2019. As a part of her album 30, that ruled music charts as the biggest selling album of 2021 with more than half of the sales through CDs which fuelled a new trend of the long lost mode. The song relives and escapes the sadness and takes a fierce plunge with beats that roar and cry in unison. Following a similar aesthetic that her October 2021 release ‘Easy On Me’ served through the video. The album consists of songs like ‘Strangers by Nature’ and ‘My Little Love’ which denotes her conversations with her nine-year-old son, about the divorce. And all I can say is that after six long years, Adele is back and surely in an avatar that has me say ‘Oh My God.’