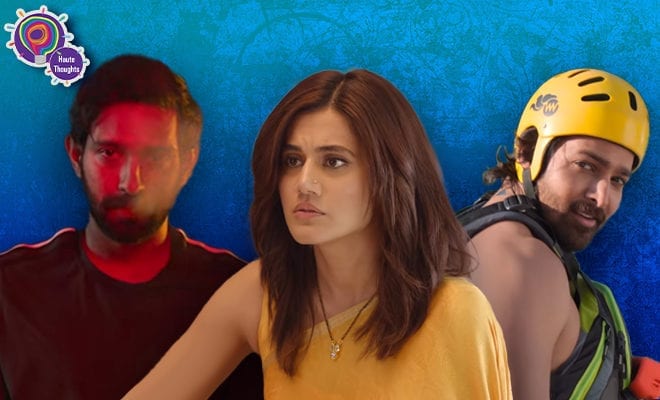 Dekho, trailer toh aisa hona chahiye that it makes you dread that its 2 minutes are up and the release feels too far away. Now usually, Bollywood doesn’t do good trailers, because it either tries too hard to impress, and ends up revealing everything about the story in the trailer itself. Or is a tad too vague and makes you wonder why the actors are doing what they’re doing, like the Sherni trailer. But recently, Netflix seems to have dropped two trailers that aren’t your garden variety kind and have actually gotten me unbearably excited for the films. First was Ray, which promises to be an exciting retelling of Satyajit Ray short stories. And the other, is the one that dropped today, of the Taapsee Pannu, Vikrant Massey, Harshvardhan Rane and Aditya Srivastava starrer murder mystery, Haseen Dillruba. The film is directed by Vinil Matthew, with story, screenplay and dialogues by Kanika Dhillon and the music is by the amazing Amit Trivedi.

The teaser of Haseen Dillruba had a similar effect, in that it evoked this curious need to know everything you could about this dark, seductive world that these characters inhabited. And particularly about who this Dinesh Pandit was! After the teaser dropped, Taapsee Pannu posted photos on her Instagram of her character reading a raunchy Hindi novel whose author was Dinesh Pandit. A nice little bait to reel us in and make us wonder what really was going on! And now that the trailer is out, we can all start making up our own theories in anticipation for the film’s release!

The film’s official summary states, “The gruesome death of a man rocks a small town and casts a shadow of suspicion on his wife. Is she an innocent victim as she claims? Or is she the mastermind behind a cold, calculated murder? What really happened? Nothing is as it seems in this unpredictable tale of love, seduction, and deception.”

Here are five thoughts I had about the Haseen Dillruba trailer:

1. Finally, Haseen Dillruba offers a trailer that is the perfect tease and not a tell-all!

It doesn’t give much away, but still manages to give away just enough information that you get excited about the film’s premise and you can start building your own theories about the whodunnit. Could it be the wife? Could it be her lover? Could it be the husband playing out some calculated ploy to extract revenge from his wife? Let the theories begin!

2. Taapsee Pannu plays the seductress with such flair! But it’s the comedic timing that gets me!

I am personally very excited for the sheer range of Taapsee Pannu’s upcoming work. From Rashmi Rocket, where she plays an athlete, and Loop Lapeta to Shabaash Mithu, which is a biopic on Indian cricketer Mithali Raj, Taapsee has a lot of interest projects lined up! But it has clearly been a while since we saw Taapsee in an out-and-out glamourous role. And Haseen Dillruba gives her that space to come out and play a seductress, which she does wonderfully, I think!

But it is the few instances of deadpan comedy that actually made me eager to get to know her character, Rani Kashyap, and what find out what really goes on in the mind of this woman, who passionately quotes from this author’s novels.

One of the film’s descriptive taglines, that talk about there being two sides of the story is something that I believe applies to Taapsee’s character as well. And that excites me even more to watch it played out on screen.

Also Read: ‘The Family Man 2’ Review: A Decent Sequel, If Not As Bulletproof As Season 1. But Let’s Talk About Its Women, Shall We?

3. Harshvardhan Rane looks drool-worthy, but it is Vikrant Massey who I am really scared of!

Okay, I can totally see why a small-town housewife (which is what I am assuming Taapsee’s character Rani is) would fall into lust with the hunk that Harshvardhan Rane looks in this film. But the usually cute and chocolate boy vibe-giver Vikrant Massey looks so formidable in some of the scenes! I have so many theories!

4. Another small town India story, but I won’t be complaining.

There are some people who say there’s been an overload of small town India stories in Bollywood and OTT in the past couple of years. But honestly, I don’t mind. I mean, nobody was complaining when we had an overdose of rich Indian families doing their thing in the cities and in foreign locales like Switzerland. Besides, these small towns and villages are where so many stories lie unexplored, and it shows us the real India, which is walking a very trepid bridge between the modern and the traditional.

The stories of women in these parts of the country, the way they are perceived and treated by the men as well as other women, offer some incredible scope for exploration. And I look forward to seeing how it’s brought to light in Haseen Dillruba, particularly because it also highlights the literature that this particular section of the population enjoys reading.

5. Kanika Dhillon has written this film, and she has written some pretty complex female characters that stay with you.

Kanika Dhillon has written some truly complex female characters, that aren’t one-dimensional and often challenging the norms of the patriarchal society they’re raised in. Her recent films include Judgementall Hai Kya, Manmarziyaan and Guilty, all of which have had some pretty interesting female protagonists who have challenged gender and societal norms and been challenged in return. That’s what makes me hope we see the magic recreated in Rani Kashyap, with Taapsee Pannu.

And while we enjoyed watching this trailer, something else was happening on Twitter. The Kangana army came out in support of her and crapped all over Taapsee’s release claiming that Taapsee has only one expression and what not.

Haseen Dillruba will release on Netflix on July 2, 2021.