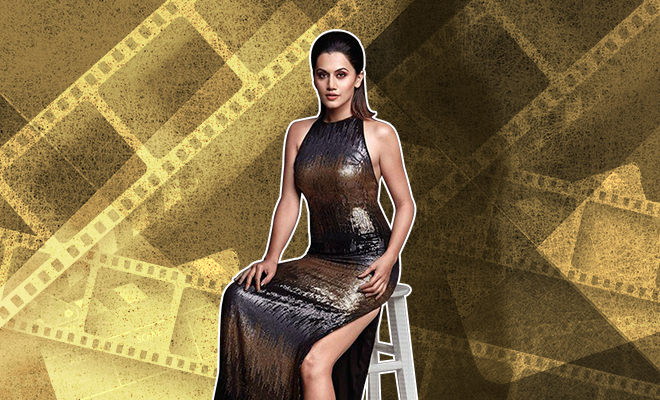 Guys, we are living in times where movies like War are being made where the makers are still to justify why Vaani Kapoor was even there. We are also living in times where people are impressed by Kabir Singh. Thankfully, in sharp contrast, there are also movies like Pink and Mission Mangal where the women refuse to play second fiddle to the men.  When we see actors like Taapsee Pannu taking charge and controlling the rhythm of the movie, it truly is a refreshing change. Since the beginning of her career, she has never succumbed to stereotypes, making her one the very few actresses we have who do not shy away from tough roles and the controversies that come with them. She is the poster child for strong women characters and her journey speaks for itself!

In a recent interview with Mumbai Mirror, Taapsee, talking about her upcoming movie Thappad says that she consciously chooses roles that defy patriarchy. Her character in Thappad, Amrita is a docile girl whose life doesn’t go as planned when she starts questioning all her decisions. Taapsee says that toning down her firebrand image was a bigger challenge than looking old. That is pretty obvious because her firebrand image is what caught our eye in the first place. Not that she can’t play, commercial roles (remember Judwaa 2? I won’t blame you if you don’t) but we just prefer her portraying roles that we can really connect to.

Her career skyrocketed after she played Minal in Pink. That movie became a benchmark and opened a gigantic window for dialogue, which frankly, we desperately needed. Since the release of Pink in 2016, Taapsee has mostly done movies that coincide with the image she built for herself and we love that she hasn’t digressed from it. I mean, she is one of the few actresses sticking to the niche she has created for herself. Movies like Naam Shabana, where she becomes a strong secret agent to avenge the death of her lover to Mission Mangal where she plays a navigation expert (if you haven’t watched this one, you have missed out) she has proved her mettle time and again.

Also Read: Taapsee Pannu Spoke About The Age Controversy Around Saand Ki Aankh And We Think She Has A Point

Taapsee, who carved her way into the industry on her merit (which is anyway a lot more than we can say for so many of them) has also played the lover in Manmarziyaan too. A role actresses have been playing on the (and off) screen for decades and she managed to add a lot of her own fiery, bold personality into it. Rumi, her character, is nothing like the docile girlfriend/wife we are used to seeing for she speaks her mind and follows her heart. So yeah, it is safe to say Taapsee is one of the most versatile actors we have who does not back down from a challenge.

In the same interview with Mumbai Mirror, she was asked whether she would do a movie like Judwaa 2 again, her reply was all kinds of real and epic. She said that she has never backed down from glamorous roles as long as it has some substance. She also said that she is happy that the lines between commercial movies and content-driven movies are blurring. This is why we love her, she speaks her mind and (most of the time) we completely agree with her! Not to mention, she is so unapologetically herself, which we hope is the kind of thing that is infectious. With the influx of new actors in the industry, we only wish more of them thought and executed their beliefs like Taapsee manages to.

On the work front, she is currently super busy promoting her new movie, Saand Ki Ankh and despite all the controversies that surround it, we can’t wait for it to hit the theatres. She also has Thappad, Womaniya, Rashmi Rocket and Tadka in her kitty.

Taapsee Pannu Says She Didn’t Have To Compromise To Make It Big In Bollywood. We Think She May Have Been Lucky!(Opens in a new browser tab)