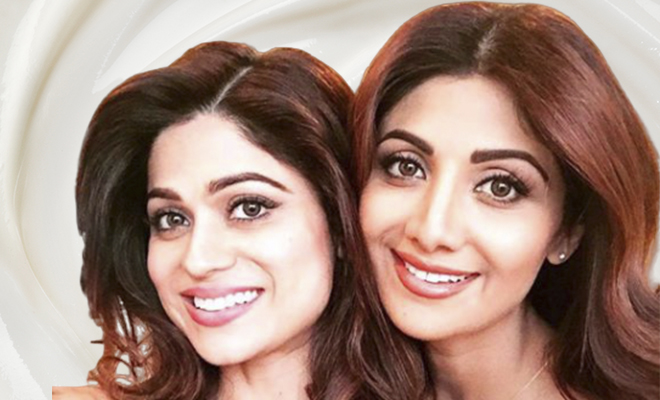 Shilpa Shetty Says She Was Insecure Of Sister Shamita Shetty Because Shilpa Was Darker. When Will We Stop Defining Fair As Beautiful?

There are a lot of things Indian people are obsessed with, but the two things that top the list are- marriage and fair skin. Let’s leave marriage aside because well, that is a whole other story. Today, I want to talk about this ridiculous notion that fair girls are pretty and dusky girls aren’t as beautiful as fair-skinned girls. It’s all bullshit, but you know that. Then again, I am dusky and I love my complexion through and through and it makes people uncomfortable because it doesn’t sit well with their idea of what is beautiful. Despite all the shit I have gotten thanks to my colour (thank you, aunties) there is not enough money in the world that would make me consider changing it.

Though, it’s tough being a dusky girl in Indian society. I have been told how unfortunate I am and how no man would marry me because of it. Yes, it is annoying but no more than having aunties I don’t know come up to me and give me nuskas on how to lighten my skin tone. Look, I know our beauty standards say that women that are fair, tall, slender and have hair like Rapunzel are the very definition of beauty. I mean, the only girl I know that looks like that is Barbie and I don’t know if you’ve figured this out, but she isn’t real. I don’t get it, what is this fascination with fair-skinned girls? I mean, women have been getting discriminated against enough for like a hundred years. Putting ourselves in boxes is not going to help anyone.

Though I love my skin colour now it wasn’t always like that. In school, I was a little ashamed of my skin tone since most of my friends back then were fair. It made me very insecure and there are times that happens even today, but I remind myself of what’s important and brush it aside. Because I believe, and I wish people hear me loud and clear, the colour of my skin does not define me.

But that doesn’t mean every single dusky girl hasn’t gone through a phase of self-hatred because of it. Of course, we have none other than our loving and inclusive society to thank for that.

Take it from fitness icon Shilpa Shetty if you don’t believe me. In a recent interview, Shilpa said that as a child she would pinch her sister Shamita in the crib to make her cry because she was insecure of Shamita’s fair complexion.

She said, “My dad told me that I did feel a little left out in the first year. Shamita was fairer, I had dark complexion so I was going through an insecurity phase in my life. I used to ask my mom, ‘why did you make her fair and why did you made me dark?’ At night when she would be sleeping, apparently I would go and pinch her and make her cry.”

In the same interview, Shilpa also said that she went to Shamita’s first audition with her and was very scared that she wouldn’t get jobs after her sister joins the industry. She said, “I always felt she’s the better looking sister, the fairer one. She’s a better actress and a dancer. So, I’ll admit this for the first time on this show that when she debuted, I did feel that nobody would give me work anymore after that.”

Also Read: Shilpa Shetty May Be Returning To Bollywood After 13 Years But She Was Never Out Of Sight

You can’t blame her. I mean, ever since we were kids we have been taught that fair skin is better than dark skin and so we are classically conditioned to believe that. What is really sad about this situation is that this skin colour rubbish is so ingrained in us that even at such a young age, Shilpa felt insecure.

Let’s make this belief redundant so no child ever again is made to feel like they aren’t good enough because of their skin tone. It is very important that we stop this discriminating skin colours immediately.

Shilpa Shetty Debunks 7 Fitness Myths. Read Because She Knows! Have You Seen How Fit She Is?