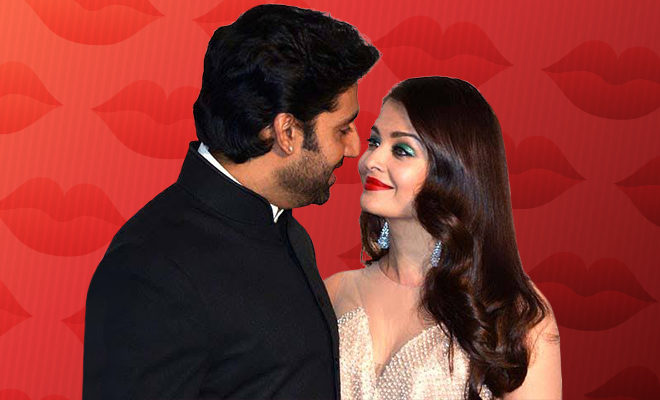 When it comes to public display of affection, I feel quite comfortable with it, depending on the situation. Now I won’t stick my tongue in bae’s mouth when my friend is sitting right there wishing to be devoured by earth. But if he’s going on a trip and we are at the airport, don’t expect me to go home without that one last kiss. I will kiss him (a short one!) and anyone who feels awkward with that are free to look elsewhere. That moment is important, that moment is love and I am not missing out on it just because it makes anyone uncomfy. Abhishek Bachchan may not be following the same school of thought with Aishwarya though!

Just the other day, I was speaking with my bestie Alisha who has always been shy of PDA. While all the other newly-married couples in our generation are putting up loved up pics on Insta, she has till date not pecked her hubby in front of anyone! I am the exact opposite. And unfortunately, she’s been a witness to me pecking someone and she was mortified. It’s hilarious. She was like tomorrow if I get married, and she will come over and I will be so cutesy with my husband, she will be super awkward. And I am just like, uh-oh!

Everyone’s different when it comes to PDA. Turns out Abhishek Bachchan is just not up for it. I don’t know but it’s endearing! On the occasion of their anniversary, an interview of the couple surfaced from years ago, when the power duo had appeared on The Oprah Winfrey Show. And what’s leaving everyone baffled? The fact that they never kissed onscreen!

Abhishek Bachchan and Aishwarya Rai Bachchan celebrated their 13th anniversary yesterday but we rarely see them indulge in PDA. They had passionate scenes in their films, full of love and warmth but lip-locking? Nope, that’s not Abhishek’s cup of tea.

Oprah asked, “I understand you have never been kissed on camera”. This is when, Aishwarya leaned towards Abhishek and said, “Go on baby.” Now at that point, most of us thought he’d finally kiss her on the lips but what did the shy Bachchan do? He kissed her on the cheek!

Abhishek explained that he prefers breaking into a dance to show love on-screen. “Not a lot of it happens as openly as in the West. It is not a thing about being accepted or not, it is not required. I don’t think the Indian audience feels it is required. To put it this way I think, if we make up a scene, for example, the boy meets a girl, they fall in love, they want to express their love for each other in the west they will kiss and there they are in love. In India, we break into a song. Isn’t that more interesting? You have this intimate moment and then suddenly snap cut, you are in the mountains and you are singing and dancing. It’s a lot more interesting, I’d much rather that,” he said.

The couple has starred together in movies such as Kuch Naa Kaho, Umrao Jaan, Guru, Raavan among others.

Dr. Chloe Carmichael, PhD, a clinical psychologist in New York told Elite Daily, “Some of us are more prone to thrill-seeking behaviors than others. There can be an element of exhibitionism to it, which revs up your physiological system: Your heart races, your body gets hotter. And if your partner is also enjoying it, it can be mutually exciting.” She added that PDA can actually relieve stress, “Even simple touch, like holding hands, has been shown to decrease our cortisol levels. We can actually get physically addicted to mild levels of PDA.”

Having said that, it’s quite awkward for people when they see a couple like getting it all hot and heated in their company. Research says it makes the couple unlikable and seem desperate to evoke envy among the audiences. Keith E. Davis, a social psychologist at the University of South Carolina said this “confronts some people with the unsettling reality that they are alone.’’ And then your friend wants to vanish into thin air. So a bit of moderation may help when you have company.

But seems like Abhishek Bachchan and Aishwarya Rai Bachchan have no such issues. We’ve never witnessed them go over the top in public. While Abhishek may be uncomfortable with physical display of affection in public, he has time and again expressed his love for his wife verbally.

During an interview with Bollywood Bubble, Abhishek wholeheartedly praised Aishwarya, “I’m always asked, ‘What did you do during the lockdown?’ Some people learned to cook, some people have picked up a new language… I was speaking to my wife about this, and as all wives do, they put your lives into focus and put you back on track.” He added, “She said, ‘For the first time in your life, you got to spend an entire year with your family, and your family is safe and healthy today’. And when she said that, apart from being appreciative of having such a wonderful and sensible wife, it’s so true. We get to do what we love doing all day, and go home to a healthy and happy family.” That’s quite a verbal kiss!

Aww…this is quite endearing, isn’t it?

ALSO READ: Abhishek Bachchan And Vivek Oberoi Hug It Out After The Aishwarya Meme Controversy. The World Can Finally Move On Now