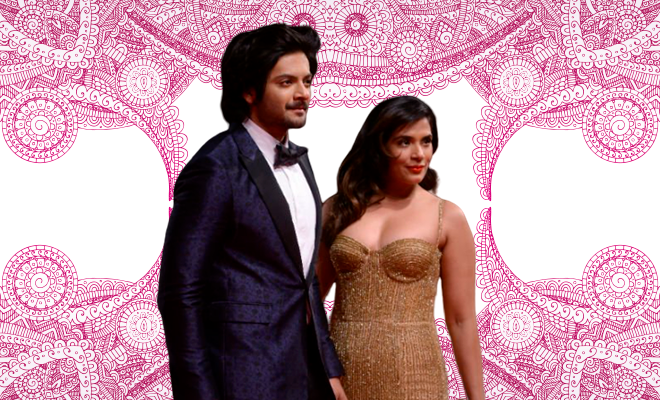 Richa Chadha And Ali Fazal *Maybe* Tying The Knot In April. Marriage Or No Marriage, They Are #CoupleGoals Already.

In India, apart from sex and memes, it’s Bollywood and cricket that really sells. We are so curious to know about the personal lives of celebrities that the moment we find any juice on it, we are all ears. Maybe it’s because the glitz and glamour of the industry fascinates us or maybe we thrive on gossip. Whatever the reason is, it’s not very important. What is of significance is the inside scoop we are all dying to hear. From who’s dating who, which celebrity couple is tying the knot to their diet and daily routine, people are interested in knowing anything. Explains the many gym pictures the paps put out every day.

And in a bid to create supply for the demand, sometimes the information circulating around is rather false. But between the true and false info, it’s really hard to differentiate and we are just left guessing. Like there have been so much talk about Richa Chadha and Ali Fazal tying the knot and each time, the news varies.

But this time, the sources seem to have a date in hand, that is, 15th April, 2020. The reports suggest that they are planning a court marriage, followed by reception. “After discussions with their families, the couple is looking at tying the knot in mid-April in Delhi. The ceremony will apparently be on April 15, which will be an intimate affair. It will be followed by a court marriage and a reception,” the source said, as reported by Hindustan Times.

The source further added, “Ali and Richa’s families are from Lucknow and Delhi, respectively, and they want all of them to be a part of their joyful day. The Lucknow reception will be on April 18. The reception in Mumbai will be for close friends and the date for which has not been locked yet. Ali and Richa have been checking out venues. In all likelihood, they will choose April 21 for Mumbai reception.”

The adorable couple have been dating since 2015 but made their relationship public only in 2017. In an earlier interview, Richa Chadha had poured her heart out about her relationship. “The thing is, it’s nothing short of a miracle. That two people who have similar backgrounds, two normal, regular people from middle-class upbringings got together. Two people with a similar value system got in this pool of showbiz. We found each other and we are happy with each other. I think that itself is a huge miracle. And when that happened, I think I couldn’t deny it that we were very…not just attracted to each other, but also understood each other on a fundamental level. It’s great you know,” she expressed and left us with major couple goals. Their chemistry and stability has everyone waiting to see them getting married and we can tell from the number of times they have been asked about the same.

Earlier they were reports suggesting they are planning to get married in June but Richa took to Twitter to hilariously brush it aside. She wrote: “At 9:00 am we were getting married, at 4:00 pm the marriage is off! Why don’t you guys only decide yaa and inform us, we’ll show up! While you’re at it, zara bacchon ke naam bhi decide kar lein. And what school you’ll send them to, suna hai donation lagta hai, de dena please. Love you! (sic).”

ALSO READ: Richa Chadha And Ali Faizal Are Proof That You Don’t Need A Marriage Certificate To Show Commitment

Now I am not completely believing this information but I am going to wait and watch. Either they will get married or at least give us a hilarious response.

ALSO READ: Richa Chadha And Ali Faizal’s Relationship is All Things Adorable. They Are Giving Us Major Couple Goals