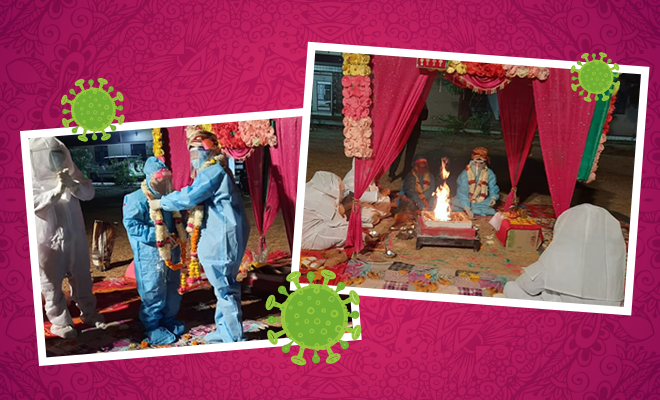 Couple Get Married In PPE Kits After Bride Tests Covid Positive. This Year, We’re Going To Witness Just Anything

I like people who don’t give up. You know the kind who would crawl their way into your life and make you fall in love with them no matter how commitment-phobic you are. I love those people who make things happen because they want them to. In fact, before the pandemic hit us, we didn’t even realise the things we really want and how far we can go for that. But a couple getting married wearing PPE kits after the bride got COVID is mind-boggling.

They say time and tide wait for none, which is true but some couples have taken the no-wait policy and applied it to getting married. Even though we are in the middle of a pandemic, people are still getting married because why wait to start your life together, right? For the longest time, weddings were supposed to be all about the show – décor, food, bridal couture, bridal entry – the list goes on. It’s like a big event that will be attended by so many people you don’t know. And if you can afford that, it’s all okay. But Indian parents tend to spend a huge chunk of their savings on weddings they can’t afford. On the other hand, you have a couple so stressed with the whole planning, they don’t even need to work on losing weight.

In the middle of the pandemic though, we’ve been seeing weddings that are more about sentiments, even though the sentiment is often to save money! Hey, there’s nothing wrong with that. So here we are, a couple who thought fuck corona, we will get married and make news while at it.

Weddings with people having their masks on are common but this couple got married in PPE kits. Obviously, they will have to do a wedding shoot later if they want pretty pictures of their wedding-y looks. I am really fascinated by the stories they will be able to tell their children and grandchildren.

In the video shared by ANI, you can see the couple getting married in Hindu style and seated in the havan kund. The bride had already been tested positive by then. They got married at the Kelwara Covid Center in Rajasthan’s Bara. I have questions about how the covid centers have started doubling up as banquet halls.

This video went viral on Twitter and the comedians of the web got their meme game up. Several people were glad they got married by hook or by crook without worrying about superficial things. Many people said it’s because they wanted to save money or whatever. On the other hand, a lot of people were wondering why they couldn’t wait.

The thing is the bride tested positive on the day of the wedding itself. And I am assuming they had planned a wedding that didn’t involve PPE kits and probably a little more decorated venue. If it’s any consolation, there wouldn’t have been a venue more sanitized than a covid center. So instead of postponing the wedding, the couple decided to go with the OG plan. It wasn’t important how but when. And as long as the woman has all the energy in the world to marry, yay!

Usually, the couples who got married after one of them tested positive had a pressing reason. Carlos Muniz a man who got covid didn’t have too many chances of survival so the hospital arranged for their wedding. The hospital posted on their social media: “Carlos Muniz and his fiancee, Grace had everything arranged to wed and were ready to say ‘I Do’ when he suddenly came down with COVID-19. His condition became critical, and he was placed on ECMO, a form of life support, as a last chance at survival. Carlos’s fight for life had diminished over the weeks and his emotions drained from his body. Watch how the power of love and the wedding of a lifetime helped Carlos find the motivation to overcome the virus (sic).” Turns out that was a good move!

ALSO READ:This Newly-Wed Indian Couple Used Their Wedding Fund To Donate 50 Beds And Oxygen Cylinders To A COVID Centre. What A Lovely Gesture

Here’s hoping this will bring motivation and vigour to the bride. Although it did seem like she had energy and enthusiasm already. Meanwhile, we just got to get used to not being surprised by anything!

ALSO READ:This Woman Became Meme Fodder For Marrying An Overweight Man. This Is Not Okay