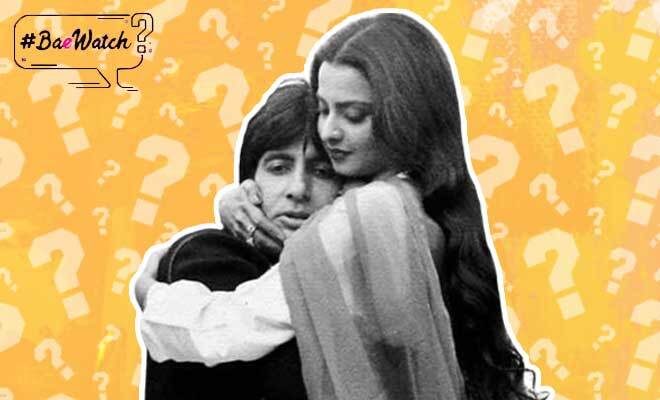 Baewatch: “My Boyfriend Confessed To Having Cheated On Me Once, Says It Was A Mistake. Should I Forgive Him? Take Him Back?”

Very recently a lot of people started talking about infidelity ever since the release of Gehraiyaan. Now if you ask me, that’s a topic that is extremely subjective. A lot of people are just not okay with their partners cheating on them, whereas some are okay under particular conditions. If you take the latter into consideration, then the first question that pops up in my head is what are the conditions under which cheating or infidelity is justified? I mean, can you even justify cheating? Also, what do you do when your unfaithful partner comes back to you and apologises to you? Do you take them back?

The fact is that questions about infidelity or cheating are not just mine – a lot of them have these doubts. In fact, one of the women wrote to us and told us the current situation she was in.

“I’ve been in a relationship with a guy for the past 5 years and we’ve had a solid thing going on. We both love, support, trust, and care for each other. But only last week he came to me and told me that when he went to Goa with his friends last month, he slept with another woman. He said that he wanted to tell me ever since it happened but he couldn’t bear seeing the pain I would feel. But he didn’t want to lie to me so he gathered the courage and told me about it. He said he doesn’t want to ruin what we have and he’d do anything to make it up. I don’t know what to do. Should I forgive him? Give us another chance? Or should I leave him?“

Having read it, I knew that her questions related to cheating were not that simple and were far more complicated.

So, I assembled Team Hauterrfly regarding it and this is what they had to say about it:

“You will eventually develop trust issues and you don’t want to spend your life keeping tabs on him due to lack of trust.”

Janvi Manchanda, Senior Features Writer: I have a question for you – do you think you can ever trust him the same way ever again? IMHO once a cheater, always a cheater. I wouldn’t tell you to forgive him. There’s a doha from the popular Hindi poet Kabir Das, “Rahiman dhaga prem ka, mat todo chatkay, tute to fir na jude, jude gaanth pad jaye.” This means that the thread of love is delicate and one should never break it because once broken, it cannot be fixed and if it is, it ends up with a knot and your boyfriend’s actions are always going to be a knot that you will have to live with. I believe that is not easy or doable for that matter. You will eventually develop trust issues and you don’t want to spend your life keeping tabs on him due to lack of trust. And he did not think about you and your pain when he was cheating on you but he was concerned about hurting you after everything is done and dusted, pardon me but what the actual fuck? Walk away, sister. That’s the best thing you can ever do for yourself.

“I think you should ask yourself if you can move past this and are actually willing to do so.”

Priyadarshini Malavia, Writer: hmmm this is a pretty tough spot to be in. To be honest, I wouldn’t blame you for staying or leaving. Anyway, I think you should ask yourself if you can move past this and are actually willing to do so. Because it makes no sense to stay in the relationship and keep using this incident against him every chance you get. While distrust is natural, you should be genuinely willing to forgive him and move on. If you believe you have it in you to do that, then you guys can always go for couple’s therapy and try to sort the matter out with a professional. This might lead to you guys strengthening your relationship. However, you both need to decide that you really want to work through this and give it your best.

“You need to sort out your feelings towards him and make a decision as soon as possible.”

Preeti Singh, Writer: This is the most messed up situation that could happen in a perfectly happy and healthy relationship. I have read this similar situation in so many books and sorry to tell you but they all break up in the end because the trust is just not there anymore. It is really difficult to gain your partner’s trust, especially for men because they are just messed up creatures, to be honest. You may think that you deserve the love and forgive him, trust me it will all be happy-happy for a few months and he will put extra effort into the relationship. But after the so-called honeymoon phase is over, reality will hit you pretty badly and you may regret your decision. So, you need to sort out your feelings towards him and make a decision as soon as possible. It will be very difficult but you will thank yourself later.

Also Read: BaeWatch: “I Think My Boyfriend Is Cheating On Me But I Don’t Have Solid Proof. What Should I Do?”

“Once a cheater, always a cheater.”

Jasveen Kaur Sawhney, Writer: Woah, this reminds me of the time when Ross and Rachel were supposedly on a ‘BREAK.’ And well we never know then. The first question that arises is, what led him to do so? The point being here is even if you forgive him for doing something like this, what’s the guarantee that this might not happen again? And also would that be okay for him if you sleep with someone else and just come back and tell him, ki listen this happened, ‘I Am Sorry.’ Would that work out for him? But having said that, it totally depends on the degree of trust that you both share. In this case, I guess he just did his deed and used ‘Sorry’ as a mode to compensate and save the relationship (which to me makes no sense). So girl, have a discussion with him, clear your doubts, because just like Rachel’s mom I too feel, ‘Once a cheater, always a cheater.’

“Because no matter how cliché it sounds, relationships are built on trust and they flourish on honesty.”

Ritu Sanghvi, Writer: This is a situation that no one should ever be in. And that is because I believe that there is no right or wrong decision and that any decision you take with regards to it will never be satisfactory. So then, how do you make a decision? Well, if you ask me, I think you should first ask him what led him to cheat on you in the first place. Understand where he is coming from and if it is something you can work on. The second question is to ask yourself if you can truly forgive him. Because if you can’t then you’re going to end up having numerous fights where this incident will be used as a weapon and it will corrupt all the good memories y’all have shared yourself. Once you get answers to that, you need to ask a third question even after forgiving him, can you truly trust him. If the answer is yes, then stay. But if there is even an inch of doubt in your mind, then leave. Because no matter how cliché it sounds, relationships are built on trust and they flourish on honesty. He broke your trust by cheating on you and you will break the honesty y’all have by being in a relationship where you still doubt his words.

“It’s quite simple really, you don’t cheat on the ones you love…”

Neeharika Singh, Designer: I think in times like these it’s important to have some space from the person and re-evaluate where exactly you both even are in the relationship. A 5-year relationship no matter how great is a long one and can come with its own set of challenges. Ask him what drove him to sleep with this other person, whether this person was someone random or someone who is actively a part of his life. The answer to that can also make all the difference. It’s quite simple really, you don’t cheat on the ones you love, especially if you’re supposedly in a loving and fulfilling relationship. I think having some distance is key and honestly, leaving him might not be the worst idea. Focusing on yourself and eventually starting over with someone new when you’re ready to, might just be what you need. And if, by some miracle, you let go of the voice at the back of your head and manage to genuinely, completely forgive him, do you really believe you’ll ever be able to trust him again?

BaeWatch: “A Guy Suddenly Ghosted Me Many Days After Our Perfect Date, I Don’t Know What To Do Next? Should I Text Him?”