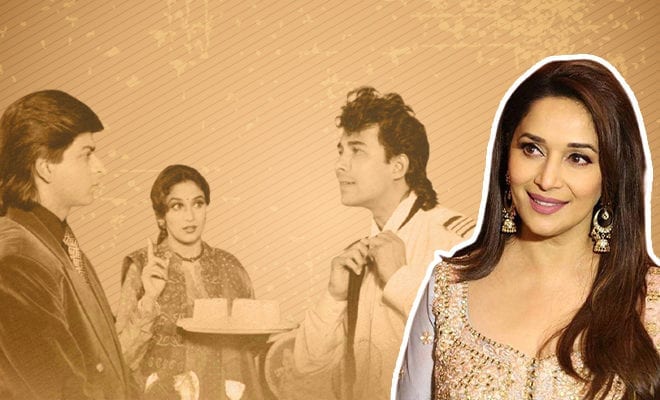 27 Years Of Anjaam: How Did Stalkers Go From Being Villains To Heroes In Today’s Bollywood?

Bollywood has had a long affair with stalker films with their relationship changing over the years. Can’t say it evolved because it seems like over a period of time, stalkers in Bollywood went from being portrayed as villains to heroes. From Anjaam wherein Shah Rukh Khan was the clear villain to Kabir Singh that made the title character an overnight youth icon in India, the journey has led us to an alarming place.

Recently, Anjaam turned 27-years-old, which is surprisingly older than some of my friends. Madhuri Dixit Nene shared some vintage pics from the shoot and captioned it: “#27YearsOfAnjaam One of my memorable films with @iamsrk & #DeepakTijori filled with lots of emotions, drama, and entertainment.”

This made me reminisce the time when I watched these films as a child (erm, yes, don’t ask!) with a heavy dose of nostalgia. I was just three years old when this movie released and I may have been pretty young when I watched it and I did a couple of times. A lot of aspects of this film had been etched in my memory: the way richie rich Vijay Aghnihotri (SRK) chases and harasses Shivani (Madhuri), an air hostess in the song Badi Mushkil Hai, Vijay singing that freaky song and slitting his wrist when Shivani gets married, and how an ugly turn of events land a very pregnant Shivani in prison.

I didn’t remember the details but I remember how I felt watching her ordeal. It sunk my heart – how a woman, living her life happily and peacefully became the object of a man’s obsession and how it destroyed her completely. The kind of things she went through just because a man couldn’t handle rejection is disturbing. Well, I don’t know why my family scarred me in childhood by letting me watch a film so disturbing – but Madhuri’s performance was so powerful, I could empathise with the pain she felt. And I do remember there being a degree of redemption. Because in the end. the character that SRK essays bears the brunt of his actions.

Today, I decided to visit the film again and I realised how a lot of things Vijay, the psychotic lover did in the start is passed off as incredibly romantic in today’s times. Vijay sees Shivani for the first time in a club and goes on to talk to her but she dismisses him. His ego hurt, he then goes on to intercept her and her friends on the road with his car, laughing scaring the shit out of her off. Wow, such amazing flirting skills. You remember that scene in Jannat when Emraan Hashmi stops Sonal Chauhan’s car and insists she join him?

When Vijay catches the Air India flight where Shivani was working just to interact with her and intentionally hits his head on the wall so she could give him first-aid? Anjaam shows it as psychotic behaviour. But cut to Mohabbatein, Jimmy Shergil’s character time and again cuts his hand so he can go to the hospital and get some nurturing from his love interest is romantic? I don’t understand…To quote instagram, ‘how did we go from this….to a very scary, almost glorified version of this?’

In the 90s, there were several stalker films and these men were portrayed as the ultimate villains, violating consent and agency of women. The clear distinction between love and obsession was not overlooked and coercion was not considered romantic. Helpless submission was not romantic. Yes, the lines were blurred, because they usually are, but mostly, these guys were the bad guys and were not glorified for stalking well.

You talk about Daraar which throws light on intimate partner violence as well as stalker mentality in our culture. Priya (Juhi Chawla) somehow manages to leave her obsessed, controlling and abusive husband Vikram (Arbaaz Khan) behind and start a new life with Raj (Rishi Kapoor). But her past catches up as Vikram refuses to let her go and stalks her completely violating her autonomy. He was shown as a villain, not like aww look how much he loves his wifey.

Darr’s Rahul (SRK) got himself the best villain award for his k-k-k-Kiran act. Best villain! He didn’t became an overnight youth icon!

These films of the 90s portrayed stalking behaviour inspired by real life. Women were being harassed because it was such a novelty for desperate men to have women walking among them – in higher education, workplaces and all of that. As women became more accessible in public, the shameless stalker men started behaving like they are up for grabs, like all they need to do is pick the one they like. And how dare she not like him back and not appreciate his pursuit?

ALSO READ: A Disgruntled Stalker Slit A Woman’s Throat Hours Before Her Wedding In Ratlam. It’s Scary And Messed Up

Eventually, it turned into romance. Tere Naam’s Radhe (Salman Khan) was worshipped by many to be the truest lover. Did we turn a blind eye to the fact that he actually kidnapped Nirjala (Bhumika Chawla) because she didn’t appreciate his advances? Do we pretend Ranjhanaa is a love story and not a story about a manipulative man obsessed with a woman? Do we act like Kabir Singh isn’t a movie about a guy who treats women like property?

Today Bollywood shows men if they stalk for long enough, with full determination, the woman is theirs. It sucks how these stalkers went from being villains to being heroes. I don’t know one woman in real life who felt comfortable with a guy stalking her, forget finding it romantic. So can we stop promoting a narrative that’s threatening our agency more every day?