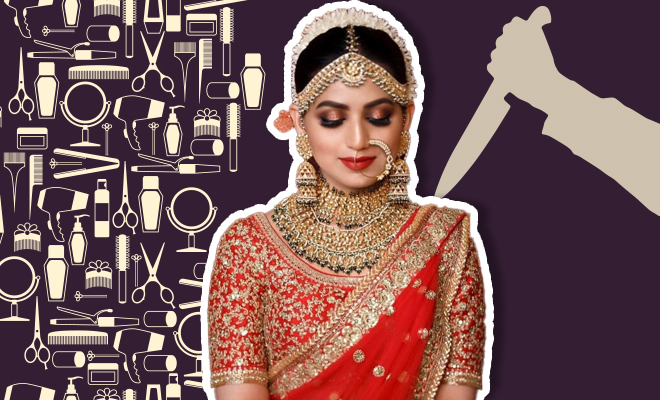 A Disgruntled Stalker Slit A Woman’s Throat Hours Before Her Wedding In Ratlam. It’s Scary And Messed Up

How many of us feel completely free in our culture as women? While men have begun to experience restrictions and stifled only after lockdown happened, we have been feeling this way forever. They now realise what it means to walk vary of physical proximity and feeling unsafe just by existing out in the open. They now understand what it means to constantly have to cover up (with masks in this case) and not know which human around you can be a threat to your life. But women? We knew this, have always known this and it’s really suffocating. One of the major reasons for our feelings of being caged even in open is that men roam around not just embracing their freedom but sucking up ours. It’s how they sit in public transport with their legs spread and taking up more space than they have the right to. These toxic men who grew up to believe that the world is their oyster and women their slaves have this disturbing feeling of ownership. Be it a husband who thinks he can beat the shit of his wife if she didn’t obey him to a lover who wants to erase the existence of a woman if she can’t be his – they are all high with false feelings of entitlement. In fact, a random dude who feels that a woman should gratify his hunger for sex and power whenever he wants and thinks there’s no concept of consent – they are all part of the same problem.

Now here we are, again writing and reading about another woman who became victim to a man’s toxic ways and lost her life for no fault of hers. A 33-year-old woman in Jaora, Ratlam was going to begin a new life but was killed by a man who couldn’t digest the fact that she isn’t marrying him. He barged into a salon hours before her wedding that day and slit her throat in one swift move and escaped.

Sonu Yadav, was going to marry Gaurav at a resort in Jaora and their families were all set with preps. She was just getting her makeup done at the salon for her big day when the incident happened. Ruchi Yadav, her cousin was quoted by Hindustan Times, “The accused introduced himself as one Rahul and said he wanted to talk to my cousin who told him that she was in the beauty parlour. He disconnected the phone and within five minutes reached the parlour on a bike. He barged into the parlour and before we could understand anything he slit her throat with a knife and fled the spot. We rushed to a nearby hospital in an auto-rickshaw but doctors declared her dead.”

Apparently, the accused knew the woman for three years and he didn’t like the fact that she was getting married to someone else. She was a divorcee and this would have been her second marriage. Superintendent of police (SP), Ratlam district Gaurav Tiwari said, “In the CCTV footage two persons were seen reaching the beauty parlour on a bike. One of them entered the parlour while another was keeping a watch outside. The second person seen outside was arrested later while the main accused is still absconding.” He further added, “The man arrested told us during interrogation that the main accused was upset with the marriage of the woman and told him three days back that if she didn’t marry him he would kill her. The main accused is bachelor and unemployed while the accomplice is married and is engaged in some job at a shop.”

ALSO READ: Cyanide Mohan Raped And Killed 20 Women. But No One Cared To Trace The Victim’s Families Or Identities. Our System Failed These Women

It is highly disturbing and for years parents have been asking their daughters to not talk to boys, cover up and not be out there to protect them from such scenarios. In fact, one of the reasons for child marriage apart from financial and cultural norms is that parents think they are saving their daughters from being abducted and sexually assaulted by men around them. Little do these parents know that when a man does these things, it is never because of something a woman did or didn’t do. It is never a woman’s blame or responsibility. In fact, they are simply putting their daughters at more risk by encouraging a misogynistic system.

ALSO READ: Obsessive Man Killed Wife For Crushing On Hrithik Roshan. This Has Got To Be A New Low