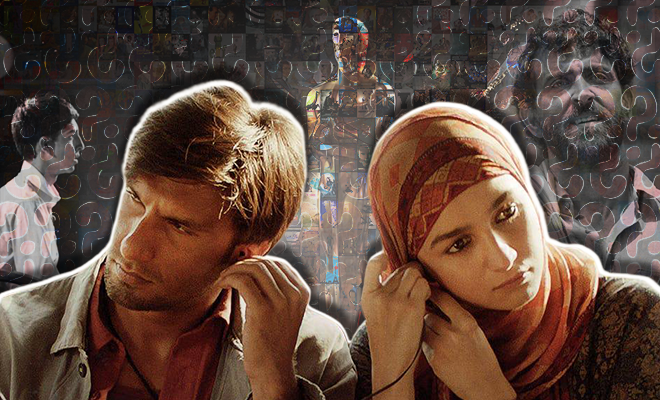 Zoya Akhtar’s Gully Boy Gets Nominated At The Oscars. We Love Her But We’ve Had Much Better Films This Year

This is a particularly good year for Bollywood and more so for director, Zoya Akhtar. And it looks it might be a turning point for Indian cinema in general. Brilliant scripts being recognised at the global level, actors are getting nominated and Indian cinema is finally becoming a player to be reckoned with. These are exciting times. Ranveer Singh and Alia Bhatt starrer Gully Boy got nominated for an Oscar.

After the news of movie Lust Stories and Netflix original TV show Sacred Games, having been nominated for Emmys had surfaced, the entire nation seemed to have been bathing in a moment of pride, especially Bollywood. Director Karan Johar called it a big moment and we believe it really was of significance that a movie as important as Lust Stories was being recognised at a global level. And then the news of Gully Boy making it to the Oscars emerged. Now we love ourselves some Zoya Akhtar, she handles relationships like no one else. However, is this the best representation of Indian storytelling? Nope.

Zoya Akhtar, the directorial prowess behind this blockbuster hit, when asked about what she felt about the film making it to the Academy Awards 2020, said, “This has been a great year and I am so overwhelmed with the response our work is getting. I am thrilled and very grateful that Gully Boy has been picked as India’s official entry for the Oscars. It’s crazy to receive such news days after Lust Stories received a nomination for the Emmys.” And honestly, we wouldn’t have expected anything less from her.

From taking her movie Gully Boy to the Sundance Festival, Berlin Festival and quite recently premiering it in Tokyo, there is no looking back for her genius, and no wonder it is getting her where she is at today – At the Oscars! Ranveer Singh, who played the lead role of Murad in the movie, took to his Instagram to post about the same as he wrote, “We are so thrilled that #GullyBoy has been selected as India’s official entry to the 92nd Academy Awards in the Best International Feature Film category. Thank you to the Film Federation of India, Aparna Sen, Supran Sen, Anindya Dasgupta, members of the jury and a big congratulations to our spectacular cast and crew.”

Siddhant Chaturvedi, who debuted on the silver screen also shared his excitement as he said, “I am super-excited. My first web show Inside Edge got nominated at the Emmys last year and now my first film is going to the Oscars!! It’s a special moment! It is all about Zoya (Akhtar) ma’am’s genius, Ranveer Singh’s uplifting bromance, and (producers) Ritesh Sidhwani and (Farhan Akhtar) sir’s mentorship! Credit goes to the whole crew.”

And we get it. It’s exciting and fun. And this was a movie that a lot of work had got into. But was this the best Indian cinema has to offer? We would have to go with a no. This year, especially, there were a slew of films that tackled much more interesting subjects – Badhaai Ho, Andhadhun, Super 30 – and these are just from Bollywood. Regional cinema has had some gems as well.

Gully Boy going to Oscar from India again proves that we still don't know which movie deserves and which one don't.

I enjoyed gully boy. But is #GullyBoyForOscars a good choice?There are so many better movies in Hindi and regional languages which were way better but then they perhaps didn't show enough of India's poverty and slums. We're stuck on showing India as dirty, poor and filthy.

The other thing is, and a lot of netizens have mentioned this, Gully Boy continues to hawk to foreign media the ‘hungry, dusty India’ rhetoric. Middle class, suburban India is perhaps not as interesting. Or maybe, we just want to be reiterations of the Slumdog Millionaire. But let’s look beyond that, we suggest. There’s just so much more to be explored.

Also Read : Zoya Akhtar Says That The Men We See In Films Today Have Changed To An Extent. Yes, But Not Nearly Enough, We Think