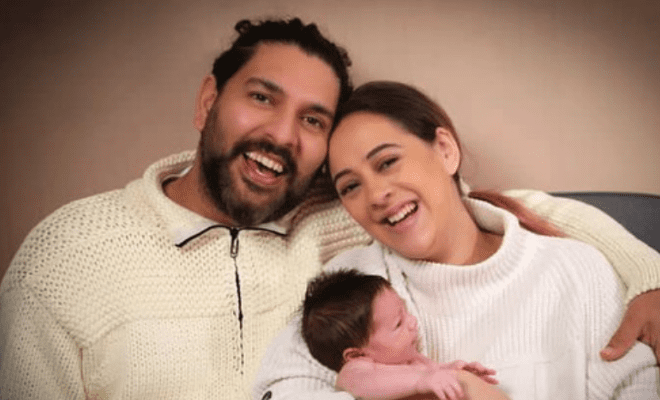 Yuvraj Singh And Hazel Keech Finally Reveal The Name Of Their Baby And It Is So Beautiful!

Yuvraj Singh and Hazel Keech had their first child, a son, early this year. Since then, fans have been waiting for the couple to reveal the face and name of their child. When the couple announced the news, their followers couldn’t help but congratulate them on the birth of their first child. Today, the Indian cricketer commemorated his first Father’s Day as a father by releasing a photo of his baby and disclosing his name to the public.

Yuvraj Singh took to Instagram to share two photos of him and Hazel Keech sitting with their baby, Orion Keech Singh. Yuvraj and Hazel are both wearing white sweaters in the first photo, and she is holding Orion in her arms. The couple’s eyes are sparkling as they have wide, happy smiles. In the following image, Orion is sleeping while receiving kisses from both his mother and father. Their tiny bundle of joy is simply too adorable to bear!

Yuvraj posted an adorable caption to go with this image saying “Welcome to the world Orion Keech Singh. Mummy and Daddy love their little “puttar”. Your eyes twinkle with every smile just as your name is written amongst the stars #HappyFathersDay”.

Hazel Keech also wished Yuvraj Singh on his first father’s day by sharing an elaborate and heartfelt post about him. She wrote, “Happy first Fathers Day to you @yuvisofficial You’ve dreamt of this day since before we even met, now here you are, a burping, bottle feeding, nappy-changing, rocking-baby-to-sleep Papa with all the sleep deprivation and vomit that comes along with the giggles, smiles and joy. You’re a great hands-on dad and I’m proud of the effort you make, always trying your best”.  She further also wished both of Orion’s grandfathers.

Yuvraj Singh married Hazel Keech in 2016 and the happy couple recently celebrated their 5th wedding anniversary. Yuvraj also announced on June 10, 2019, that he would be retiring from all forms of international cricket after serving the team for 19 years.

Uorfi Javed Now Has A Fan In British Designer Harris Reed. We Are Quite Impressed!