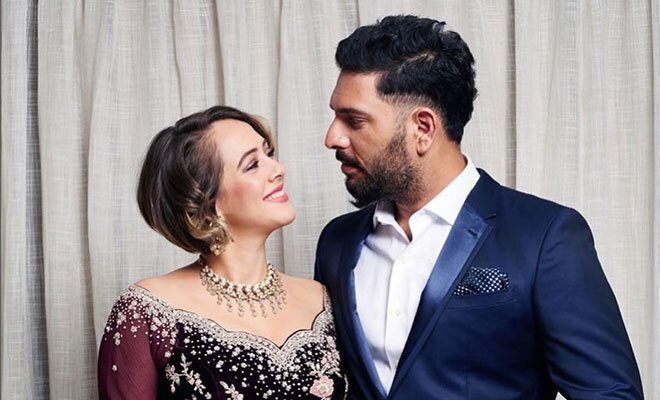 Having a baby is like starting a new chapter of one’s life. It can be exciting and challenging at the same time. And we all know that parenthood comes with new changes and some responsibilities but more importantly it bring a lot of joy in the lives of a couple. Ever since we’ve heard Priyanka Chopra and Nick Jonas’ baby announcement, we’ve been overjoyed. And even before we could get over the shock, Aaditya Narayan and his wife Shweta Agarwal announced their pregnancy news and if that wasn’t enough now, actor Hazel Keech and former cricketer Yuvraj Singh have announced the arrival of their baby. Guess it really is raining babies this year!

Taking to social media, both the cricketer and the actress shared that they have been blessed with a baby boy. Hazel Keech and Yuvraj Singh also requested everyone to give them privacy as they welcome their child into the world. “To all our fans, family and friends, we are elated to share that today God blessed us with a baby boy. We thank god for this blessing and wish you to respect our privacy as we welcome the little one into the world,” read their post.

As soon as the couple announced the arrival of their baby, their post was flooded with congratulatory messages from family, friends, celebs and fans alike. Producer Pragya Kapoor was one of the first ones to drop love on their post and congratulate the new parents. Soon after, Neha Dhupia commented on Yuvraj Singh’s post that read, “Congratulations mummy and daddy.” Angad Bedi also congratulated the couple. “Congratulations singh ji !!!! @yuvisofficial @hazelkeechofficial hope the baby and you are doing well,” read his comment. Actors Ayushmann Khurrana, Richa Chadha, Bipasha Basu, Raveena Tandon, Abhishek Bachchan and several others also congratulated Hazel Keech and Yuvraj Singh. Suresh Raina, Sania Mirza, Sourav Ganguly, Saina Nehwal, Chris Gayle and Rishab Pant were also among the other celebs who congratulated the new parents.

On the other hand, Twitter exploded after the couple announced the arrival of their baby. While several fans congratulated the couple and shared blessings for their baby boy, others seized the opportunity and asked Yuvraj Singh and Hazel Keech if they will share pictures of their baby or will they hide his face like Anushka Sharma and Virat Kohli. But most of the fans were just glad that the couple did not announce their divorce since a large number of celebs have been making such announcements on social media. Many fans and followers asked the couple to reveal the name of the baby. Take a look at these tweets.

For one sec I thought divorce announce Kar rhe

FYI, actress Hazel Keech and former cricketer Yuvraj Singh tied the knot in 2016. Ever since then there have been several pregnancy rumours that the couple has ignored time and again. This is their first child together.

Well, we’re really happy for this couple. We wish them loads of luck, love and blessing for their new journey. We hope that they bless our feeds with cute baby pictures but we will also support them if they choose to do otherwise.