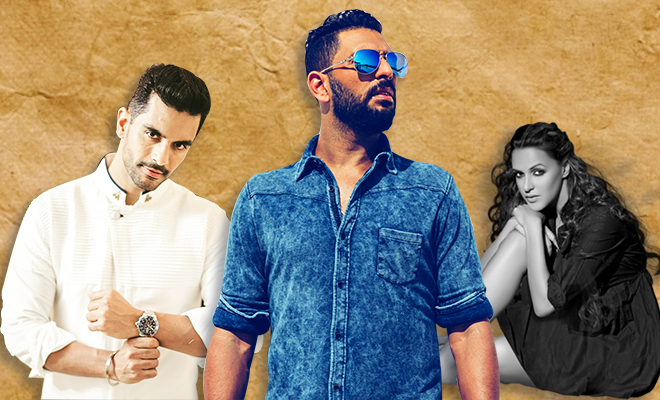 They say that getting over someone you dated is easier than getting over your best friend. We share everything with them, and show our most vulnerable side, trusting them to never hurt us. From hilarious, embarrassing memories to those filled with love and warmth, it’s difficult to undo your love for someone you once considered bestie. Yuvraj Singh and Angad Bedi used to be such bros, before things went sour and now, things are just not the same.

One would think, that it’s been a while, and since everyone’s forgiving everyone, Yuvraj and Angad would have made up as well. But unfortunately, that’s not the case. While there were a plethora of renowned faces at Yuvraj’s retirement bash, and even his ex-girlfriend Kim Sharma made an appearance, Angad Bedi and Neha Dhupia were missing. According to a report by SpotboyE, the couple weren’t invited! This could have been a good opportunity to make amends, but Yuvraj has decided to hold on to the grudge!

Meanwhile, Angad Bedi had admitted on wife Neha Dhupia’s chat show that it was because of his fault that their friendship got ruined. “But he is entitled to his opinion so it’s fine. It was my fault and I say this very openly that I should’ve given him more time but then unfortunately for us the decision making was so sudden. He has his reasons to be upset and I really love him but if you want to say what our relationship is right now, yes, it’s not the same and I hope in due course it does get better because I miss him, he’s a dear friend of mine,” expressed Bedi.

So those living under a rock, this is what had happened. Yuvraj had briefly dated Neha Dhupia, and he got very upset because his close friend Angad didn’t tell him anything about them getting married. He basically found out when the rest of his acquaintances did. It’s been more than a year since they tied the knot, but Yuvi hasn’t forgiven Angad.

In fact, just a day after Friendship day last year, Yuvi had posted a picture with a nasty caption, quite evidently taking a dig at Angad. But if Yuvi can make peace with ex-girlfriend Kim, why wouldn’t he make amends with his once-upon-a-time close friend?