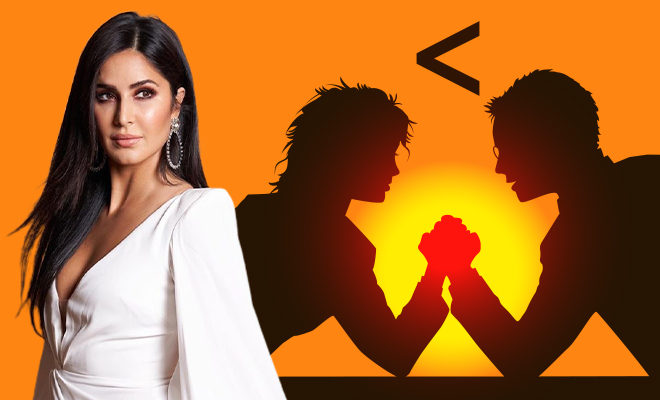 Mahatma Gandhi once said, “To call woman the weaker sex is a libel; it is man’s injustice to woman. If by strength is meant brute strength, then, indeed, is woman less brute than man. If by strength is meant moral power, then woman is immeasurably man’s superior.” Words that haven’t just been forgotten, but are no longer taken seriously by society that has systematically placed men in a superior position to further their own patriarchal agenda. For decades now, women have been forced to live under the thumb of men who have been made to think that they are the stronger and superior sex. Except, women in today’s day and age have proven it otherwise by doing everything that a man can, and maybe even better. From reaching for the skies to running multi-national corporations, women are everywhere and standing shoulder to shoulder with their male counterparts. A fact that was recently reiterated by actress Katrina Kaif.

Talking about how self love is most important, especially for women considering how they are often pushed down by the society, Katrina Kaif started an important dialogue as she talked about the problematic perception of women being the weaker sex.

Also Read : Katrina Kaif Dishes The Deets On The Lifestyle Changes She’s Made Over The Years To Contribute To Sustainable Fashion. We Are Taking Notes!

She said, “People will tell us all kinds of things and that is why, self-love is numero uno. Women should know what they are capable of. Sky should be our limit. We should not give anyone any kind of power to bog us down or even under-value ourselves.”

She went on to say, “The gap in education, the lack of access to equal opportunities and the deep-rooted belief that women are the weaker sex is a problematic perception. The stereotype that we attach to women should end and I am glad to see a change taking place as we speak.”

Talking about her own life and acknowledging her privilege, Katrina shared, “I grew up in a family where I was always surrounded by my mother and sisters. They are the strongest women I know. I believe that I am quite privileged that my gender has never made things difficult for me.” Further to this, Katrina also took a moment to commend the efforts of women all around who have been putting in the hard work to achieve their goals, and who motivate several other women to do the same.

“I would urge more women to speak up. It is not okay to feel inferior or weak because we are not the weaker sex by any stretch of the imagination, ” – Katrina Kaif https://t.co/CjVj5IE5Vi

“Sometimes, I’ve noticed as women we feel apologetic for asking what we deserve. Instead, when we see women from different backgrounds and walks of life excelling across diverse fields and carving a niche for themselves, that in itself should be a motivating factor for other women to come forward and achieve their goals. If you do not have anyone’s support, remember that you are self-sufficient. Change should come from within. We need to have a strong sense of self and not forget that we are made for the greatest things,” shared Katrina, almost striking a chord within all of us women.

This discussion came upon to be while coursing through her latest Reebok campaign, ‘It’s A Man’s World campaign’.