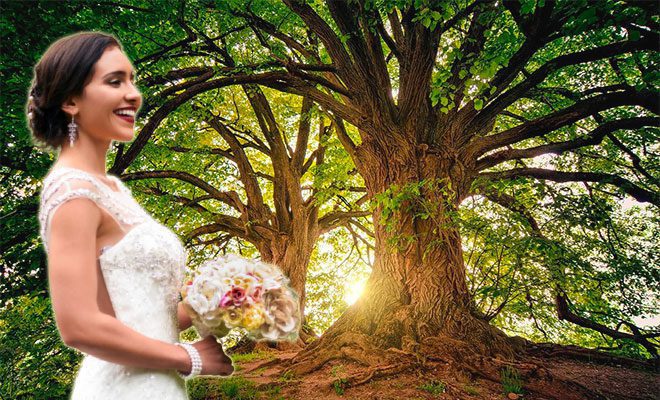 Women In Bristol Dress Up As Brides To ‘Marry’ Trees To Prevent Cutdown, Were Inspired From India’s Chipko Movement!

Global warming is a real issue that we’ve conveniently gotten good at ignoring. And cutting down trees is the one of the biggest reasons for the devastation of our planet. I mean, how often do you find a tree to take shelter underneath when the rain is pouring? We are so engrossed in the rat race and so concerned with just ourselves that we have forgotten to take care of our planet. Having said that, time and again we have had protests erupting that make us look at the consequences of our actions—remember the Aarey colony protest in Mumbai? Well, these women in Bristol, UK, staged a unique protest by marrying trees that were set to be cut down for the emergence of new building plans in the area. Yep, married!

I married a tree today! 60 women gathered for a mass ceremony to honour our Partners for Life and Save the Baltic Wharf trees… pic.twitter.com/5fVCeofllD

Recently, over 70 women married over a dozen trees to highlight the Bristol building plans that would ensure that trees are removed from the site of construction. The building plan aims to build 166 apartments on the land covered with trees.

The woman who organised the ‘wedding’, Siobhan Kierans, said that the point behind getting married to the trees was to show that trees are humans’ partners for life and cutting them down is not an option. And so she and other 70+ women wore wedding dresses belonging to different cultures, including Indian, and married 74 trees in a ceremony!

One of the tree brides, Suzan Hackett, was proud of the event that aimed to save the trees from getting cut down. “To get married to a tree is an absolute privilege. It’s not just a sentimental gesture, it is highly significant and symbolic… Trees are pure examples of unconditional love, which fits in so beautifully with the whole idea of marriage. Marriage is for life, breathing is for life… Bristol needs mature trees more than it does luxury private housing.”

Also Read: Woman Activist In Bali Dresses As A Mermaid Amidst Plastic Waste To Highlight Pollution On Indonesian Beaches

According to BBC News, the organizers of the event stated that they were inspired to do this from the 1970s Chipko Movement, led by Sunderlal Bahuguna in Uttar Pradesh, India, in which women hugged trees to prevent them from being cutdown. Just the way the women in India had hugged the trees in the Himalayas to save them from deforestation due to logging, the Bristol women also wanted to do something to protect the trees.

Also Read: Hema Malini Skipped A Meeting About The Pollution Crisis Because ‘Bombay Is Not As Polluted,’ She Said

One of the professors at the Bristol Veterinary School also acted as the Best Man in the event said, “Once the planning application has been approved, it is too late… Nobody is going to reverse that decision. That’s it, the trees will go and there is very little we can do about it… We cannot afford to lose these 74 trees. It is an enormous number of mature trees and in a part of Bristol that needs them most.”

Honestly, I’m proud of the entire event that took place. It is inspiring on so many levels, especially when you know an Indian ecological movement was the inspiration for it! Trees are the best partners humans can have. And as a partner, it is our responsibility and duty to protect them from deforestation.

No Matter Your Budget, Planning An Eco-Friendly Wedding Is Possible. Here’s How!