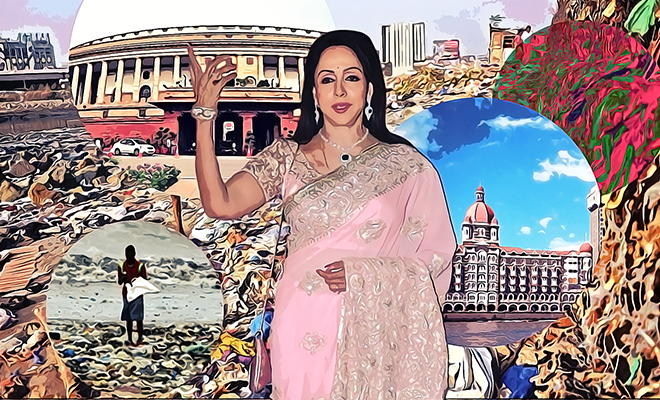 Hema Malini Skipped A Meeting About The Pollution Crisis Because ‘Bombay Is Not As Polluted,’ She Said

When you live in a country like India, there are a few things you just expect. Aunties bitching about their maids, men chewing on a beetel leaf, never getting a rickshaw at the first go and of course politicians talking utter shit and fooling us all. Let’s focus a little on that last point, shall we? Politics in India is in a dire condition, you know that. But truthfully if you observe the game a little you conclude that it isn’t as complicated as they make it our to be. It is just a bunch of people sitting around, not working and then releasing statements that make absolutely no sense at all. Don’t believe me? Take a look at what Hema Malini has just said about the rising pollution crisis in the country. It has really left us stumped and speechless, but we aren’t surprised because we never expected any better.

Let’s dive straight into it, shall we? The actor-turned-politician was amongst the 25 MPs who decided to opt out of the Parliamentary debate that was regarding the air pollution catastrophe. An issue that has got the whole country in its grips and is making life in the capital very difficult for people, seemed to have very little effect on politicians. Well obviously, it’s not like they form the government of our country or anything!

But the politicians paying more attention to their pockets than what is actually good for the country isn’t a new story. What actually has us completely flabbergasted is the excuse that Hema Malini had for the MP’s skipping the debate. She said, “Maybe the reason is that those who are connected and living here are participating, but those from other places like Bombay the problem isn’t as much. So, they aren’t taking as much interest. I have no idea.”

I mean, you expect them to say things that ridiculous, but this is just stupid! What part of global warming does Hema not understand?! She has literally one job, going to the damn debate and voting for whatever option works in our favour the most. How can you screw that up and then excuse it by saying, pollution is not affecting Bombay? Yeah, Bombay isn’t in a smoggy situation like Delhi but how long before that changes?! And really, is Mumbai not affected? We had rain till November this year. November! The monsoons usually beat a retreat by September. So, yeah, only makes sense, we guess.

You know if our amazing politicians stopped making excuses and actually owning up to their rubbish, the country would not be in such a disastrous state! There are people – common citizens- who are tirelessly working to make cities more green, less polluted and less stress. But the people who are supposed to be responsible, the one’s who can actually make changes at a greater level are busy galavanting around town!

Also Read: Dharmendra Trolls Hema Malini For That Video Of Her Sweeping The Parliament And It’s Downright Hilarious!

Hema is also on the Urban Development Parliamentary Committee. The committee is working on various urban issues like pollution. We are really wondering if they just sit around and drink chai!

To make her statement even more redundant, it would be fun to note that a lot of parts of northern India including Mathura has an AQI (Air Quality Index) of over 170. Why is that fun to note you may ask, it because guess who the representative of Mathura is. Yep, it is Hema Malini indeed! So even she thinks Bombay isn’t polluted *rolls eyes*, shouldn’t she care about the people she represents?

The pollution crisis isn’t something we can take sitting down. Let’s try harder, please!