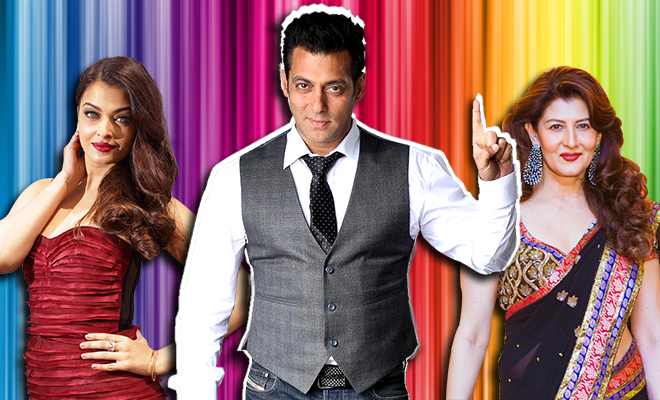 What Is With Salman Khan’s Exes Being Friends With Him? The Guy Is Known For Being Abusive!

There are some people who can be friends with their ex. And there are some like me who would rather not revisit those times. And it isn’t because my break ups have been ugly or either of us cheated on each other or threatened to not let the other one move on. It is simply because we somehow knew that there is not much left between us in terms of a spark or you know, adding any kind of value. And also because breaking up wasn’t all that hard as advertised. But that is not something we can say for a select Bollywood superstar and his tribe of exes. We are talking about the Bharat actor Salman Khan, and all the gorgeous women he has ever dated.

It is no news that Salman Khan, who even with the universal title of Bhai in the industry, and despite being a “virgin” has been in quite a few relationships in the 23 years of his acting. But it’s not surprising. Women thought Kabir Singh was loving also. But what has all confused, is that despite breaking up with all of them eventually, he still continues to be great friends with them and we honestly are itching to know what these women see in him.

It all started with the veteran actress Sangeeta Bijlani, who was rumoured to be dating Salman Khan during the start of his career, was seen celebrating her birthday with him. Apparently, the two enjoyed each other’s company until Sangeeta allegedly realised Salman wouldn’t ever agree to marriage and abandoned Salman to marry cricketer Azharuddin. Although their marriage ended, Salman and Sangeeta never shared bad blood and till date continue to hold each other in high regard. In fact, just a day ago on July 9, Salman Khan threw a big birthday bash for Sangeeta at his Bandra residence.

Then came in Somy Ali, who floored by the actor, flew from Florida to India just for Salman Khan. They too had a similar falling in love and then falling out kinda scene, with rumours that it was Aishwarya coming into the picture during the shooting of Hum Dil De Chuke Sanam that caused their love story to end. The actress, however, still says how she doesn’t regret her relationship with Salman and continues to maintain cordial relations with him.

Also Read : Sona Mohapatra Takes Another Dig At Salman Khan And Calls Him A Paper Tiger. He Deserves It!

Ash, on the other hand, who had been linked with the Bharat actor for the longest time, was the only one Salman had such a bitter falling out with. The actress, soon after their breakup went up to disclose how he had been abusive in his relationship with her, and chose to never look back. Smartest one, we say. As the hype simmered down, rumours about a romance brewing between Salman and Katrina started to make the rounds.

The relationship with Katrina followed a similar pattern. He becoming a mentor of sorts to her, recommending her name for movies. She became a star, slowly. The romance ended soon but the bond they shared continued to thrive. Even after the actress started dating Ranbir Kapoor, Salman was A-okay with her choices in life and never sought to take it out on her professionally. In fact, after the actress delivered two back to back flops on the box office – Jagga Jasoos and Baar Baar Dekho, it was Salman’s movie that bought her back on the block.

Come to think of it, it feels as though Salman maintains this hold over almost all his exes, out of love or out of loneliness, we aren’t entirely sure and are okay to not know. Barring Aishwarya Rai of course, but who are we kidding? This was a woman who was going to make it on her own terms. It helped that she was a Miss World title holder.

Also Read : We’re Going To Say It. Salman Khan Is An Egoistical, Misogynist Man Who Refuses To Grow Up

So what is making all these women gravitate towards Salman Khan when he was, during the course of their relationship, either borderline or downright abusive? Is it a sense of gratitude they have towards him for he helped them land somewhere in their career? Do they feel like they owe their loyalty to him? After all, anyone who knows Salman Khan, knows not to pick a fight with this big dog in the industry lest they want their career to take a nose dive. You know, like that of Vivek Oberoi after he publicly called out Salman for how badly he treated his women.

But then again, whether it is such philanthropy or the most famous biryani his house offers that is making this Khan very tempting, we may never find out. Just like we may never find out the reason why Salman, despite falling in love at the drop of a hat with so many, hasn’t even found one that will stick around long enough to make something out of it. Or is it the other way round and being nice to them is his way of dealing with rejection? The mind is boggled. Because, surely,  these women aren’t sticking around because they thought he was very cute when he dumped a cola over their head. (Somy Ali, in case you were wondering!)

Whatever it may be, we are not condemning the star or accusing him of a hidden vendetta here, but we will go ahead and say that if push comes to shove, we are pretty sure these actresses will do just as fine without Salman . Or so we hope!