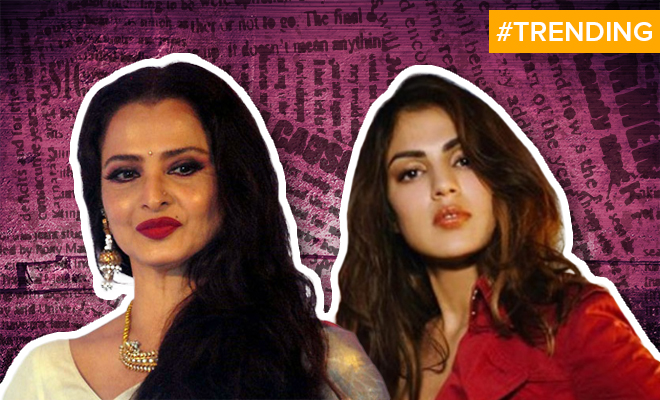 We’ve A History Of Blaming Women When Men Kill Themselves. First It Was Rekha, Now It’s Rhea

Hey, it’s Monday. And to start you off, because we love our daily dose of positivity, let’s talk about all the things you can get blamed for if you are a woman in India. You can be blamed for your own rape, because as has been established time and again, men cannot control themselves. It’s like their penis using it’s own magical powers, catapults itself at a woman who is just going about her day. You can get blamed if your boyfriend or husband kills himself. Wait, even if we were to suspend all our disbeliefs, this sounds pretty out there.

And this is not the first time this is happening. As Chinmayi Sripaada shared from an account on Instagram, back in 1990 when Rekha’s husband died by suicide, she was called a ‘vamp’.

Subhash Ghai and Anupam Kher’s quotes, circa 1990 on Rekha if reported verbatim, is how some men are made.

It is unbelievable how Rekha survived and thrived. pic.twitter.com/GWlSUt3Zzh

And back then also (*insert deep quote about history repeating itself*) Rekha was the person who was supposedly the cause of this. That he was battling depression and mental health issues was conveniently brushed under the carpet because who needs to know that when you can spread rumours about a woman who wants to live by her own rules? So what if the man was seeing a therapist, who was so insecure that he was constantly on Rekha’s sets, suffocating and stifling her. For that time, we are pretty sure Rekha made men and society at large, uncomfortable with her defiant stance against all things considered ‘appropriate for a woman’. It was a media trial then, it is a media trial now.

When Rekha’s husband passed, Mukesh Gupta’s brother Anil Gupta was famously quoted saying “My brother loved Rekha truly. For him love was a do or die attempt. He could not tolerate what Rekha was doing to him. Now what does she want, does she want our money?” Of course, this fit the narrative perfectly. She was a woman, she did not nurture him, she did not love him. Obviously the fact that she might have her own money was an aspect that was wilfully ignored. And it wasn’t just that. Everyone came to watch the guillotine come down on Rekha’s careers, they relished this aspect of it. Anupam Kher added his two bits to the frenzy, said. “She’s become the national vamp. Professionally and personally, I think it’s curtains for her. I mean I don’t know how will I react to her if I come face to face with her.”

In an old interview with Simi Garewal, Rekha mentions that the intricacies of the marriage are not important, but that this was when she became a ‘woman of the world’. She called it a crash course in what people were all about, who her friends were and that after the entire episode, she became the person she is truly proud to be. But that she’s a shy person and that she spoke about the incident to only a select few, something you would expect someone to be allowed to do. Clearly, it didn’t sit well with everyone.

And this is from Rekha, the woman the world and media had taken to the gallows because it suited them so.

While no one has been as explicit with Rhea, calling her a vamp or whatever , at least from SSR’s family, there are have several passive aggressive social media posts and updates putting the entire blame on Rhea for allegedly procuring drugs for Sushant. It makes her sound like some shady drug peddler selling stuff on street corners but we as a nation and media and consistently made Rhea the villain. Her arrest had people gleefully please like it was some sort of personal triumph. People have called her everything from gold digger to murderer without any proof. In the midst of a pandemic, she’s goaded by camera, pushed and troubled for a byte. And all this is amplified by social media. It’s unending. It’s tiring and it needs to stop.

We need to hate our women less.

ALSO READ: The Gleeful Celebration Of Rhea Chakraborty’s Arrest Shows How We Have Messed Up Priorities