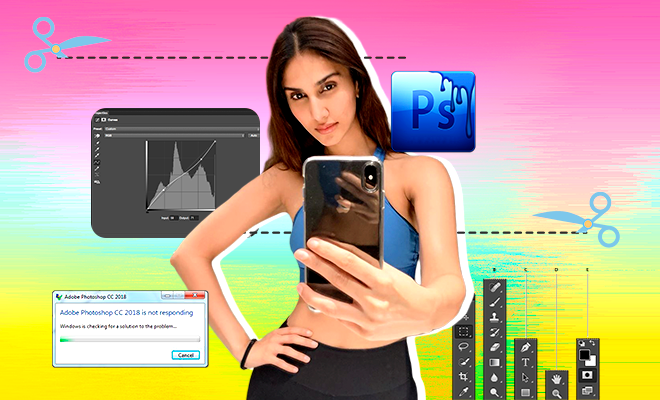 Vaani Kapoor Got Into An Argument With Trolls Over A Picture. But It Looks Photoshopped To Us. Are Beauty Stereotypes To Blame?

Internet is heavily populated with this subset called trolls, who psychologists say, show higher levels of psychopathy traits. A lot of people, sitting behind their screens justify it as humour or harmless opinions but these trolls have far crossed that boundary. They have graduated to displaying low levels of empathy and conscience and an elevated level of sadism – typical traits of offline sociopaths as well. These trolls indulge in anti-social online activities by dropping in hate comments and shaming people on things they know would hurt the most. Which is probably why, when trolls started body shaming Vaani Kapoor on her latest Instagram post, she took the effort to actually reply to them.

So here’s what happened. Vaani uploaded a mirror selfie in which she has worn tights and a blue sports bra while looking as fit as a fiddle. However, going by the definition of a typical Indian ‘khaate peete ghar ki ladki‘ some people found her to be too skinny for her own good. But these trolls who have taken on the persona of a very annoying and nosy aunty went on to shame her for being thin.

A user called her “manly” and that hit her hard or so it seems because she actually responded to him saying, “I hope you’re aware your nothing but an attention seeker .. but there is still time , don’t go all hopeless on yourself, you still can get necessary help (sic).” However, the troll wasn’t going to back out just like that and further wrote, “@_vaanikapoor_ well you’re the one posting 2-3 pictures every other day so we all know who the attention seeker is. Btw, there’s difference between ‘your’ and ‘you’re’. Didn’t they teach you this in your fancy lad school?”

Before blocking him out, she wrote, “ummm YOUR grammar is worse than YOUR attitude ! PS Let me save both of us the trouble by blocking you. You can’t see me and I don’t have to go through your irrelevant comments. K byeeee.”

Another guy asked her if she was suffering from malnutrition, to which Vaani replied saying, “why don’t you find something productive to do in life ??? Please stop being harsh on your self life is so much better.. stop reflecting hate (sic).”

This is really sick and clearly shows how given the right conditions, so many people are capable of hurting others without feeling any guilt or responsibility. Body shaming is one of the popular tools these trolls use to hurt people on social media. You never know when you will be shamed for your size, scars or body hair. If you have big breasts, they will look at you like you’re a piece of meat. If you have small boobs, they will say you’re manly. If you are always fully covered, you’re a behenji; if you wear revealing clothes, you’re ‘slutty’. No matter how you look, people will find a way of making you feel insecure about your appearance because unless you fit in a very narrow box of beauty stereotypes, you become fodder for internet trolls. Actually, even if you do fit, you will still be fodder.

We are constantly worried about our appearance and somehow never satisfied. At least most of us! I remember, back in college I had a fit bod and yet, I felt the need to lose more weight. Why? Because our fashion magazines set standards so high, it’s not even funny. Everybody is telling you how to lose weight, how to be a size 6 and how to get fairer. Is that why Vaani Kapoor photoshopped her picture? Yep, we zoomed in on the picture and you can clearly spot the distorted blurry areas around her hands. These things typically happed when we’ve warped an area of our body to make us look slimmer. Is that why, it hurt her right at the spot? Is that why she got into a feud with a couple of lame, pointless trolls?

But one thing I can tell is that beauty stereotypes have plagued us since forever and women in the showbiz are all the more susceptible to these. I also know several people – celebrity or no celebrity – use apps to tweak their pictures to appear slimmer and blemish free. But imagine a fit woman like Vaani too felt the need to make her arms look thinner. At what point, can we actually feel satisfied with our bodies?

ALSO READ: Ranbir Kapoor Got Trolled For A Picture With Alia Bhatt. Frankly, It Reeks Of Jealousy

I hope one day we wake up, like our feline fellows, uninhibited and unapologetic about our appearances. And also, not trying to distort realities to fit into our idealistic fantasy.

ALSO READ: Once Again, Malaika Arora Trolled For Her Age And Her Relationship. Dear Trolls, It’s Getting Old