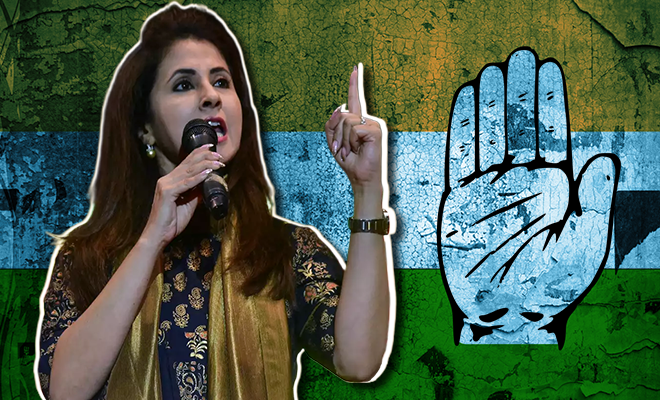 Urmila Matondkar Quits Congress Because Of The Petty Politics. Erm, What Were You Expecting?

The first rule my mother taught me was to fight in what I believe in and not to give up unless absolutely necessary. I have sworn by that rule as a baseline for adulting, be it a subject I can’t master or dealing with a bunch of people with different beliefs than mine. But there are some people that don’t see life in this light, quitting is their first option when faced with adversity. Similarly, when actress-turned-politician Urmila Matondkar was faced with a petty issue at the Congress house, she chose to resign rather than fight for the changes she wanted to make. Every child in India can tell you no one in politics plays fair, you will be stabbed in the back, dragged through the mud and be defeated even if you’re already a known to the people.

Six months after joining the Indian National Congress, Urmila called it quits causing another blow to Congress in Maharashtra. In a statement addressing the media she said she did not wish to be used in “petty in-house politics.” We do want to ask her though, did she not know what she was getting into, politicians are going to be politicians? In the last elections, she contested as the Congress candidate from Mumbai’s northern region but was defeated by veteran politician BJP Gopal Shetty who was the BJP representative.

In the statement she accused former Congress President of the Mumbai region, Milind Deora of overlooking a letter she had written to him which states all her concerns about the party. She also mentions that in an act of pure betrayal that letter which contained privileged and confidential communication was leaked to the media.

“To my utter dismay, the letter containing privileged and confidential communication was conveniently leaked to the media which according to me was an act of blatant betrayal. Needless to say, no one from the party was apologetic or even concerned towards me for the same despite my repeated protests,” Urmila Matondkar said in her statement.

Another concern of hers was that some incompetent members of the INC that she had named in her letter were awarded with newer positions. “It is obvious that the key functionaries of the Mumbai Congress are either unable or not committed to bring about a change and transformation in the organisation for betterment of the party,” She said while also thanking all those who helped and supported her.

She also promised to continue to work for the people with honesty and dignity and we can’t help but wonder if she would’ve been able to make the change she wanted if she had just pushed through and played the game and not ran out the door the first chance she got.

The Comments On This Picture Of Suhana Khan Are Proof Of Our Cheap Mentality. She Can Wear What She Wants!