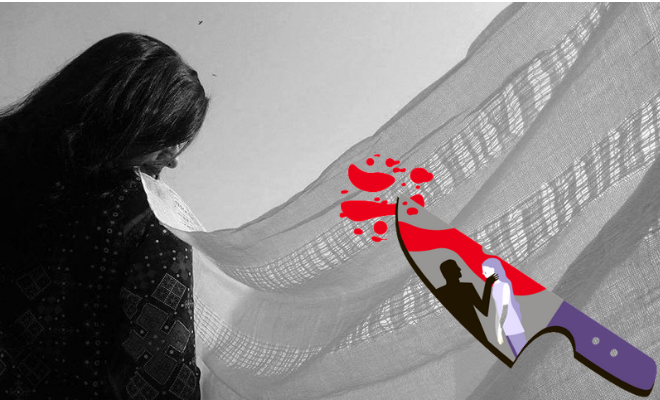 UP Man Strangled His Wife To Death After Having Sex With Her. Reason? Dowry.

The bond between a husband and wife is supposed to be that of love, care and affection. It is supposed to be of partnership and respect, at least in theory, considering they are who we choose to spend the rest of our lives with. But seems like if there is one emotion that trumps any other, it is greed. And in a country  like India, where marriages often take place for the greed of getting dowry, things go sour all the time. Like in the recent case in Uttar Pradesh, where a husband strangled his wife to death after having sex with her.

In a horrific turn of events, it has been reported that a man named Amit Lala, who hails from Nasirpur village of Kanpur Dehat, killed his wife brutally and strangled her with her own dupatta, after he lured her with a promise of giving her money.

The victim identified as Kanchan was a resident of Pari Ojha from Hamirpur and had married Amit Lala almost three years ago. The two even had a son together who is also two years old. Upon investigation it was brought to light that Kanchan would often get into fights and arguments with her husband and in-laws for they kept pressurizing her for dowry.

UP: Man kills wife after having sex with her in Hamirpur | Kanpur News – Times of India https://t.co/2MkNVKyKPq

Also Read : UP Man Asked Men On Social Media To Pay For Sex With His Wife After She Refused To Give Him A Bike In Dowry. This Is Sickening

After getting tortured by her in-laws, Kanchan decided to leave and shifted to her parents house on January 4. However, almost a month later on February 2, the woman went mysteriously missing and didn’t return home. The parents of the victim, worriedly filed a complaint for Kanchan with SP Hamirpur Narendra Kumar Singh. They suspected foul play by their son-in-law.

It was then that the police found out how Amit had lured Kanchan to come to Hamirpur town to take money from him, only to first have sex with her and then strangled her to death with her dupatta. After murdering his wife, accused allegedly threw away the woman’s phone in a river and hid her body in a field.

This brutal and inhuman incident of dowry killing, unfortunately isn’t the first one either. Every day, several women lose their lives over matters like that of money and dowry, and it is not okay. Dowry is illegal and that men still think entitled to it, so much so that they are willing to kill their own wives for it, it means that the society and the government for that matter isn’t doing a sound job in establishing otherwise.

At this moment, the accused has been booked under relevant sections of the Indian Penal Code (IPC) and we hope that he gets fairly punished for the heinous crimes he has committed.

Also Read : This Dowry-Demanding Husband Was Granted Anticipatory Bail Because Going To Jail Would End The Marriage, According To The Court. So The Wife Is Unimportant?