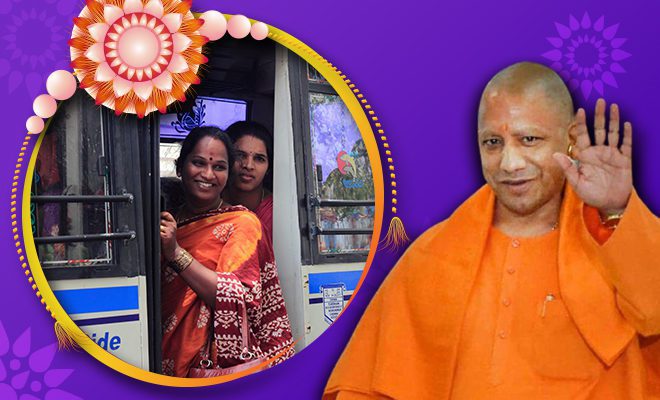 Everyone knows that Uttar Pradesh is not a women-friendly place. And that is putting as nicely as I can. If you’ve ever Googled ‘woman’ and checked the news section, you’ll know exactly why I am saying this. Women in UP are assaulted at the drop of a hat and despite CM Yogi Adityanath’s (bare minimum) initiatives and efforts, it’s not getting any better. It’s getting worse, actually. But the UP government may have completely turned a blind eye to this surging problem of crimes against women. Or they’re in denial. I saw this after Yogi Adityanath announced that all women will get free bus rides on the occasion of Raksha Bandhan. It’s a sweet gesture but how about giving them some semblance of safety? I’m sure the women in UP would appreciate not having to live in fear over free bus rides.

Reportedly, Uttar Pradesh’s CM announced that he would be giving women a “special gift” for Raksha Bandhan. He said the UP State Road Transport Corporation (UPSRTC) will offer free bus services to all women. This facility will be available for 24 hours, from August 21 midnight till August 22 midnight. Yogi Adityanath also announced that there will be intensive police patrolling to ensure the safety of women. Why is this only for one day? Not to mention, looking at the condition of women in the state, should the police be patrolling intensively anyway? This is really worrying.

Uttar Pradesh CM Yogi Adityanath has announced that the state road transport corporation will offer free bus rides to women in all categories of buses on the occasion of Raksha Bandhan. The facility will be available from midnight August 21 to midnight August 22. pic.twitter.com/AQEXOf2dr2

Also Read: Yogi Adityanath Has Ordered That Every Police Station In UP Have Women’s Help-Desks. It Took Them Two Violent Gang Rapes To See The Need For This

The UP government has asked the police to maintain social distancing and keep all COVID norms in mind. They’ve directed people to celebrate the festival in their homes and not hold any public gatherings. As nice as it is of the UP government to offer free bus services to all women, they have to start paying attention to the violence against women in the state.

Yogi Adityanath Continues To Make Empty Promises To Boost Women’s Safety In UP. The State Has Clearly Failed Its Women