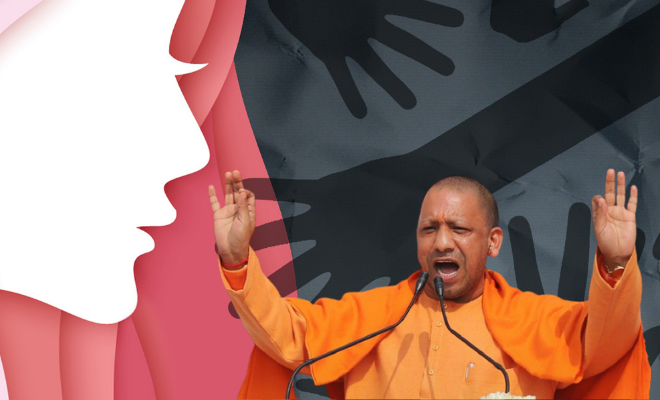 Yogi Adityanath Continues To Make Empty Promises To Boost Women’s Safety In UP. The State Has Clearly Failed Its Women

I don’t know if you’ll have realised but when it comes to women’s safety, the state of UP, like most states of our country, is all bark and no bite. The government, led by, the one and only, Yogi Adityanath has tried to do the bare minimum and get away with it. But have you looked at UP’s crime statistics lately? There is no way their measures are enough. But well, their hollow efforts continue. Recently, the UP government took two new decisions. One was directed at protecting women during Navratri and the other one was to set up a data analytical centre to counter crimes against women. Usually, we would be a little at ease knowing that the government is working towards combatting the threat. However, after two back-to-back brutal gangrapes and the state’s murky track record, we have no such expectations.

Even though CM Adityanath has repeatedly talked about making the situation in UP better for women, he has not gotten anywhere. If anything, things are starting to get worse. Take the Hathras incident for instance. What were the cops doing? Because they sure as hell didn’t seem to be in a hurry to catch the monsters that did that to a 20-year-old girl. There is an alarming failure of law and order in UP when it comes to women.

Besides, this isn’t the first time that Yogi Adityanath has promised measures to counter crimes against women. A few days before the Hathras rape came to light, he said that he had given orders to officials to publicly name and shame men who commit crimes against women. Has anyone seen the posters of the Hathras rapists? Well, there aren’t any. It has started to feel like the CM’s new directives are a way to merely pacify the public.

Don’t Agree? Let’s Look At His Latest Tweet For Instance

Yogi Adityanath took to his Twitter to write that his government has a “zero-tolerance policy” for crimes against women. Well, he could have fooled us.

He wrote, “UP Govt has a policy of zero-tolerance against crimes. Due to continuous action by the state government, there has been a significant reduction in crimes against girls/women.”

I have to admit, this tweet confused me a little bit. What state is he talking about? It can’t be UP considering the condition of women there. According to the NCRB report, in 2019 UP recorded 59,853 cases of crimes against women. So, where is this “significant reduction”? One more thing, if he has a zero-tolerance policy, why did he allow the cops to handle the Hathras case the way they did? Is it like a convince-based policy?

Nevertheless, CM Adityanath continues to make empty promises. Let’s break this down, shall we?

On Wednesday in Lucknow, Yogi Adityanath directed officials to conduct a special campaign on the safety of women and girls during Navratri festival which begins on 17th October. The state government released a press statement wherein the CM has directed the cops to take swift and prompt action in cases involving women and girls. He has also asked them to deal with these matters sensitively.

Just to clarify, does his meaning of “sensitively” and “prompt action” mean cremating the victim’s body in the dead of the night? No? Besides, it scares me further when the CM has to tell the police to do their job. We just assumed they knew to take action when there is a crime against a woman.

There’s more. The CM also said that anti-Romeo squads will be active in sensitive places to keep a check and ensure the women are safe. Okay, but weren’t they already doing this? If it hasn’t worked before, who’s to say it will this time?

This is actually a half-decent initiative but as I said earlier, it’s all bark and no bite. You see, in the wake of the Hathras and Balrampur rapes, the UP government has finally understood there is a serious problem. So, Additional Chief Secretary, Home, Awanish Kumar Awasthi has said that the government will be setting up a ”Data Analytical Centre” under women power line 1090.

Basically, these Data Analytical Centers will help identify hot spots for crimes against women. And based on this analysis, police teams will be deployed to ensure the women are protected.

Awinash Kumar Awasthi said, “The data of crimes against the women will be collected from various sources in this Analytical centre and action will be taken accordingly. The hot spot of eve-teasing will be marked based on which police will be deployed.”

Let’s hope for once the UP government comes through. Because the way I see it, nothing that has been promised until now has been delivered. So forgive me for being highly sceptical.

Also Read: Yogi Adityanath-Led UP Government To Put Up Posters Featuring Men Who Have Committed Crimes Against Women. Is This Enough?

Another thing I wanted to talk about was the way the UP government is politicising the Hathras rape incident. It’s no secret that the way the UP police mishandled the case has raised some serious questions about the law and order in the state. But now, it’s somehow turned into a blame game between the Congress and the BJP.  Of course, because why should anyone take responsibility for what happened to that girl? The BJP, meaning the Yogi Adiyanath’s government, is saying that the Congress is cashing in by starting protests. While the Congress is calling this whole ordeal a huge “white lie”. Does no one seem to care that a 20-year-old girl lost her life after being gang-raped and tortured? Isn’t that more important than winning some political feud?

The state of UP has miserably failed its women.