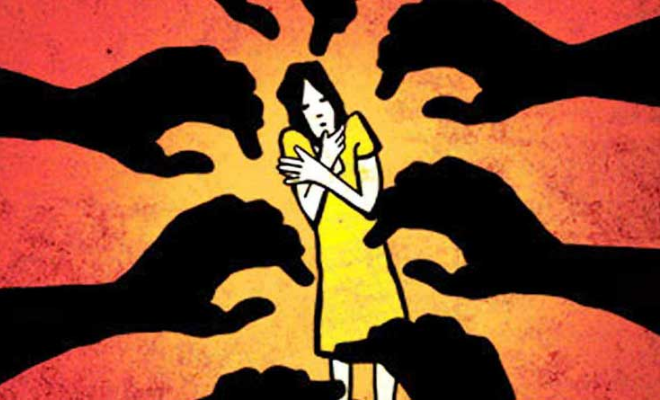 Hathras Horror Repeats In UP’s Balrampur. Another Dalit Girl Gangraped And Cremated In A Hurry.

It’s so easy to open Instagram, look at all those bright-coloured, floral-decked bumper sticker posts that promise you that being a girl is awesome, powerful, amazing, and what not. Because the news of another horrific rape, violent crime against women or their exploitation and abuse is just one unexpected scroll away. Being a woman isn’t easy or safe in this world. Being a poor Dalit woman in India, perhaps the hardest of them all. The ashes on the funeral pyre of the Hathras rape victim had barely cooled down, when another horrific news arrived to send a chill down our spine. In Uttar Pradesh’s Balrampur, another Dalit girl was allegedly gangraped. What’s even more shocking is that her cremation too, was done in as hurried a manner as the Hathras victim’s was. In the dead of the night.

Trigger warning: Another horrific rape and murder of a young Dalit woman in Balrampur. In any other situation, in any other country, leaders in charge would take moral responsibility and resign for failing to ensure safety of women.

As for the UP CM Yogi Adityanath and the UP government, this is yet another blot on an already stained sheet, riddled with crimes against women, and caste-based violence against Dalit women.

Another Dalit Girl gangraped in #Balrampur , UP.
She is no more and she has also been cremated at night.
This is gruesome. We are not humans. #DalitLivesMatter

According to reports, the 22-year-old Dalit girl had gone to take admission in a college near her village in Balrampur on Tuesday, and did not return at night. When she returned on Wednesday, she was in an auto-rickshaw, and had a glucose drip inserted in her hand. Her family realised that she girl seemed dazed and her condition was not good. They rushed her to a nearby hospital, and eventually to the Balrampur district hospital where she succumbed to her injuries. The family had initially alleged that the girl had fractures in her hands and legs. However, the police officials revealed that no such injuries were indicated in the post-mortem examination.

The two accused in the case have been arrested. According to fresh media reports coming in, a local doctor has come forth as an eye witness. He claims to have been called by the two accused to treat the victim before she returned to her parents. He told the media that one of the accused came to his clinic to take him to his house at 5 pm on Tuesday. At the house, the accused introduced the victim, lying alone on a sofa, as a family member and asked the doctor to treat her. However, the doctor grew suspicious and refused to treat her until a family member, like her father or mother, was present there.

The doctor claims the accused told him that they would bring the girl to his clinic with her father for the treatment. However, they never showed. Later on, he learnt that the girl had died.

Also Read: Our National Data Of Crimes In 2019 Has Recorded 87 Rape Cases On An Average Per Day. This Is Extremely Alarming

After what happened in Balrampur, the entire nation is in a massive uproar over these horrific acts of violence against women in Uttar Pradesh, which only seem to be rising. Twitter has been set ablaze by the utter apathy of the power to be to the caste-based and religion-based violence happening right under their noses in their states.

The usual suspects are thrilled the suspects in the #Balrampur gang rape are Muslims. But shouldn’t they be angry that the state is so lawless that unspeakable brutality against women & children are happening so frequently?The culprits have to be punished severely. But will they?

Honestly I cannot bear hearing and watching any politician on the #Hathras and #Balrampur rapes. When they crowded my frame while I interview the victims brother, I asked them to step away from camera. They were all missing while the woman was alive and fighting for her life.

Another day in #UttarPradesh #NoCountryForWomen

If you are outraged about #Hathras & now #Balrampur, here are some horrific incidents which took place in UP in Aug-Sept

These are just few reported incidents. Everyday UP papers are filled with these stories.

The cases that make the news are only the ones that get reported in some form (reported, not investigated or given justice to, mind you). The actual numbers could be way beyond what we fathom.

Hathras. Balrampur. Many more. There’s an image running viral on the Internet right now, which says ‘Beti Bachao’ wasn’t a slogan, it was a warning. We’re starting to think it might just be true. Because first, she has to survive these monsters to avail that free education, reservation and opportunities that the government has promised her. Aap chronology samajhiye.