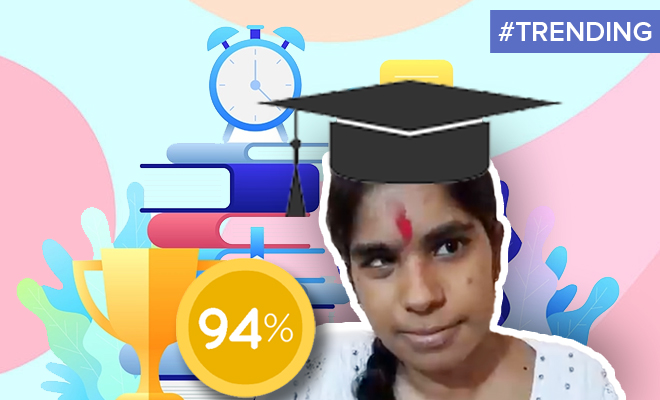 #Trending: She Had No Money, No Electricity. Yet Kirti Kushwaha, A Visually Impaired 17-Year-Old Girl, Scored 94% In Her 12th Boards

The biggest example of that is 17-year-old Kirti Kushwaha from Satna, Madhya Pradesh. You see, despite losing 75% of her vision, her father losing his business, her brothers having to drop out due to financial constraints, she found a way to fulfil her dream of getting a good education.

On Monday, the Madhya Pradesh Board of Secondary Education (MPBSE) announced all 12th-grade results. Kriti, who took the exams this year scored a whopping score of 94.4% marks i.e. 472 out of 500 marks. Not to mention, she secured the 8th rank in the entire commerce stream.

This girl has overcome more hurdles in 17 years of her life than most people do in their lifetime. And even then, she did not give up. In fact, she worked harder and persevered and now, all her hard work and dedication has paid off. It’s such a wholesome feeling.

When she was asked how she felt about her name in the merit list, she said, “This is the answer for all those who used to taunt me that you can’t do anything.”

People can be so insensitive.

Kriti’s mother told HT that the family had no money to make ends meet. But Kriti refused to give up her studies. In fact, she convinced locals to send their children to her for tuitions and that is how she paid for her own education. She is such an inspiration!

Rashmi Kushwaha, Kriti’s mother said, “Kirti didn’t have 50% vision since her birth and she gradually lost 25% vision in another eye. But she continued her studies in a school for normal students. Two years ago, her father Kavi Shankar Kushawaha met with an accident and lost his small tent house’s business. Once we had no money to make our both ends meet. It had become impossible for us to pay school fees and bear other expenses on studies. Kirti’s elder brother and younger brother decided to leave studies but Kirti refused to leave her studies.”

She further added, “Kirti convinced some parents in nearby localities and started giving tuition to students of up to class 8. As she was a talented student, parents of students showed trust in her and started sending their kids for tuition to her. She continued her studies with money she earned by giving tuition.”

Also Read: Sreedevi, A 16-Year-Old From A Tribe In Tamil Nadu, Scored 95% In 10th Boards Overcoming Many Hurdles. She’s A Star!

Kirti Kushwaha didn’t have 50% vision since her birth and she gradually lost 25% vision in the another eye. But she continued her studies.

Fighting against all odds she scored 94.4% in 12th Commerce exam! We are proud!#SalutingOurSisters ♀️https://t.co/6T3Q5nbKYR

Rashmi also said, “Her journey was not so easy as the doctor asked her not to study in the poor light in the night due to her decreasing vision. The electricity department cut our connection as we didn’t pay the bill last year in July. The connection was resumed recently but we can’t afford a good light system. But Kirti didn’t raise any demand for more facilities. She managed her school, tuition and studies from 6 Am to 6 PM by counting every minute.”

Of course, Kriti is a real star. But, I would really like to take the time and appreciate her parents as well who let her pursue her dreams of an education. Usually, when a family runs into financial problems in villages and towns, they force their daughters to drop their education and prioritize their son. But, Kriti’s family gave her space to not only study but figure out a way she can make it happen. So, kudos to them. It’s just like I was saying earlier- where there is a will, there is usually a way.

Kriti is an inspiration to us all and she is proof that hard work and determination really do pay off.

This Girl From MP Pedalled 24 kms Every Day To Attend School And She Scored 98.75% In Her Class 10 Exams. She’s Such An Inspiration