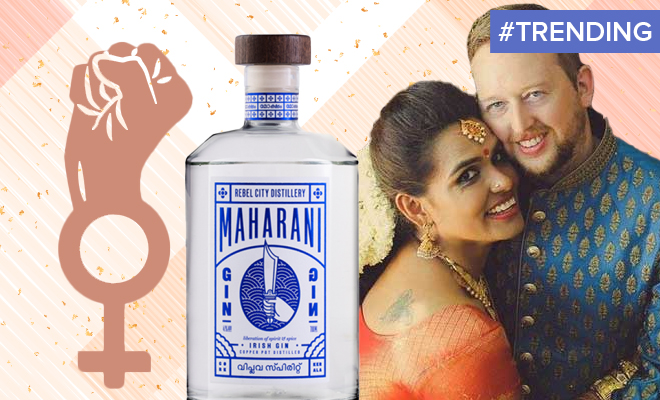 #Trending: Maharani Gin Made By A Bi-Racial Couple In Ireland Is A Tribute To The Strong Women Of Kerala Women. We Are Loving This

I love watching Indian culture be represented in other countries. Like even watching an Indian actor in a US TV show gives me great pleasure. Of course, a lot of those representations make blunders because they stick to stereotypes without understanding our culture. I know they don’t mean any harm when they show Indians being scientists and getting an arranged marriage, it gets my goat because this is literally the next stereotype after us being snake charmers. Indian culture and traditions really need more authentic representation around the world. I mean, we are the largest democracy in the world and people from everywhere else are still shocked to know that we have malls and wifi. I mean, seriously?!

Which is why, when I found out that a distillery in Ireland had made a gin with a Kerala twist, I was super intrigued. If there is anything that the culture in Kerala and Irish culture have in common, it would be a love for alcohol. Right?

Anyway, this gin, called the Maharani Gin is the first release of Rebel City Distillery based in Ireland. It tries to blend together the culture from Kerala and Ireland because that’s where the co-founders, Robert Barret and his wife, Bhagyalaxmi come from.

The signature botanicals used in the gin are sourced from the Wayanad district, giving this gin a Kerala twist. It was created to bring out the traditional flavours and ingredients from Kerala. Robert said, “As a couple who accommodates distinct cultural backgrounds, we wanted our first product to celebrate this diversity.”

Spices that originate from Kerala like nutmeg, mace, pomelo and cassia go into making the peculiar sour and spicy gin. Robert added, “I structured the remaining ingredients  — cardamom, lemon, orange, coriander, orris and juniper to support the flavour,” All these spices are sourced from a women’s organic farming collective, Vanamoolika, based in the Western Ghats.

This sounds delicious. We can only hope they release this gin in India as well, I think a lot of people would pay a lot of money to try this drink.

Also Read: Study Says Women Likely To Drink More Alcohol During Coronavirus Lockdown Than Men. Why Are We Not Surprised?

Robert is a biochemist while his wife, Bhaygalaxmi is an IT professional who moved to Ireland in 2013. The couple met and instantly hit it off through their shared love for crafting beers. “We love visiting farmers’ markets, art galleries, museums, craft distilleries and breweries during our travels,” says Bhagyalekshmi.

I am sure you’ll are wondering why the drink is called Maharani Gin. Of course, you’ll know that Maharani means Queen. They chose this name because the culture of Kerala is traditionally matriarchal and the name “Maharani” is a tribute to revolutionary women everywhere.

This makes me so happy. This gin is like an ode to strong women and it’s such a nice feeling. Especially since in the past, all the big companies in the alcohol game have made such colossal mistakes while trying to represent women through alcohol. This is such a refreshing change. Also, I could really use a small peg of this drink just on the rocks, right about now. I am so excited about a spicy and sour gin.

The branding and the bottling are also in coordination with their wish to represent Malayali-Irish culture. Bhagyalekshmi said, “We chose to write Viplava spirit (rebel spirit) in Malayalam on the bottle, as a nod to the rebellious history of both Ireland where we are based and Kerala.”

They have authentically tried to combine two very dissimilar cultures and actually succeeded in making a gin that is more inclusive than any other beverage in the world.

I seriously hope they sell this in India.

Plume And Petal Is A Floral Flavoured Vodka For Women. Because Apparently Regular Vodka Is Too Manly For Us