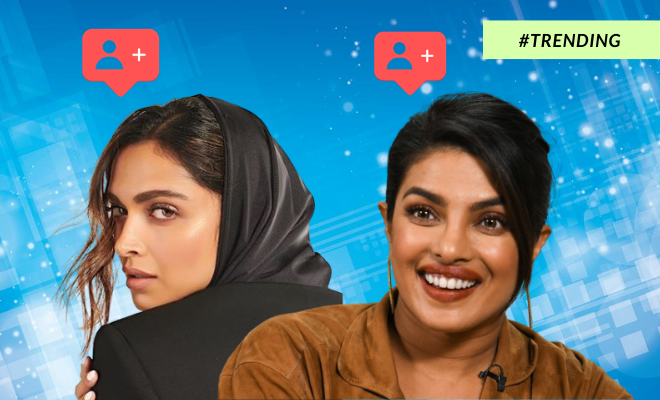 #Trending : Deepika Padukone And Priyanka Chopra Might Be Questioned In The Fake Followers Scandal.

Years ago, if someone would’ve come up to me and said that I could, while sitting at home and maintaining my account on a social media app, not just become hella famous, but also make money off of it, I’d probably not believe them and go back to eating cheetos in my pyjamas. Years later, when that digital prophecy has indeed come true including the bit about me eating cheetos in my pyjamas. We millennials have finally found a career option they can explore and all you need is a decent ‘following’. Because when you can selfie your way to the top of this game, chances are you’re not going to stop just there because then the money starts flowing in.

The cost of becoming an ‘influencer’ on social media is measured in terms of your followers, and the aim is to increase followers with every passing day and post. Wherein we struggle to maintain our current count from dropping any further, there are ‘influencers’ out there for whom having thousands followers added on the daily is no big deal. Those are the ones who have been minting serious money with collaborations and brand sponsorships. Except it hasn’t all that black and white as it seems.

With reports circulating on how the number of likes and followers could be manipulated, considering not all those counted in those million following represent actual human accounts, a lot of celebrities digital following has come under the scanner, for investing in the fake followers business. And while in Hollywood, everyone from Ariana Grande, to Kim Kardashian to even Adele was reported to have a percentage of fake followers, in Bollywood, two A list celebrities have recently come under the radar of the Mumbai Police and might be questioned soon. Namely, Priyanka Chopra and Deepika Padukone.

After a special investigation has been started to get to the bottom of this fake followers scandal, a lot of high profile builders, Bollywood celebrities and sports personalities have found themselves on a list of questioning by the police on the matter. This was after a man named Abhishek Dinesh Daude was arrested for creating fake profiles on social media.

Did you know it's illegal to buy followers? Oops. Someone tell influenzas. https://t.co/ynHFCW3v2s

Turns out, the racket surfaced after singer Bhumi Trivedi found her fake profile on social media, and discovered that the person who created it on Instagram would chat with people and use those screenshots to increase the followers. Joint Commissioner of Police Vinay Kumar Chaubey spoke on the matter and shared, “We have investigated and found as many as 54 firms involved in this racket. SIT comprising Crime Branch along with Cyber Cell has been formed which will help in investigating this case.”

With rumours about Priyanka and Deepika being among the 8 celebrities to be questioned on this matter surfacing, a Special Investigation Team has been assigned to the matter. While Deepika sits at a whopping 50.8 million followers on Instagram, Priyanka Chopra  has a followership of 55.3 million. Figures that might compel anyone to find out, how many of those followers are real and how many, bots.

Also Read : Deepika Padukone Launched The ‘Dobara Poocho’ Campaign That Encourages People To Check In With Those Suffering From Mental Health Issues