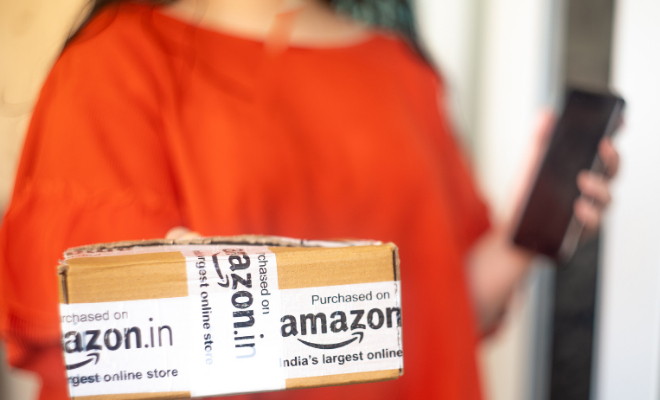 To Boost Employment Of Women, Amazon India Sets Up An All-Women Delivery Station In Gujarat. We Need More Companies To Do This

Here’s the thing about gender roles is that they prevent growth. There is gender bias everywhere you look. Especially when it comes to employment. Women are overlooked, underpaid and in corporate India, we are barely making a dent. Only a handful of organizations can successfully say that don’t discriminate when it comes to gender, even subconsciously. The conversation about period leaves- whether it was a big deal or not – is proof that equality is a far cry right now. The truth is, we need to do as much as we can to boost employment opportunities for women. Which is why when Amazon announced that they have set up an all-women delivery station to do just that, we got excited.

“This first-of-its-kind station in Gujarat is completely managed and run by women across managerial and delivery associate roles. Amazon India has introduced several measures to ensure a safe workplace for women by creating awareness and building various feedback mechanisms to address concerns through open dialogues,” the statement said.

Amazon India opens its second all-women delivery station in India in a bid to increase its women workforce.@amazonINhttps://t.co/scVk11bsX5

How amazing is this?

As of now, eight women have already been hired to work at this new all women delivery station. A helpline number has also been created for all the associates who deliver packages within a 2-5 km radius. The Delivery Service Partner program is a last-mile delivery model where Amazon works with partners to leverage their local knowledge of the community.

Prakash Rochlani, Director, Last Mile Operations at Amazon India said, “Our vision is to enable women to discover meaningful career opportunities across the operations network at Amazon India. We have created more than 6,000 opportunities for women across our network where they continue to thrive and excel.”

According to reports, Amazon has created job opportunities for over 200 women. Recently, they also opened a deliver-station managed and run solely by transgender individuals.

Also Read: 9.1% Women And Girls Are Going To Get Poorer In 2021 Due To The Pandemic, According To The UN. Let That Sink In

It’s these kinds of initiatives that make a real difference. I do have one question though- why open separate delivery-stations especially for women? Why can’t women work with the men side-by-side? Don’t get me wrong, it’s an amazing opportunity that is going to help a lot of women become financially independent but I can’t help but wonder if this is a move that’s meant to be inclusive because it could seem exclusionary. It’s clear that women can do the job as well so why not hire more women in general instead of opening a station just for them? If it’s inclusivity and women participation that they want, why aren’t they including women and letting them participate? Of course, this could come from a deep-rooted cultural bias where women simply aren’t as comfortable rubbing shoulders with men. With an all women delivery station, the women can work without inhibitions.

Another thing, it’s not enough that one company is thinking about how to boost women employment. Even if that company is Amazon. All companies need to be working towards educating their male employees on proper behaviour, closing the pay gap and hiring more women in general. That’s the only way we are going to climb the ladder.

Having said that, we are glad Amazon is taking these steps!