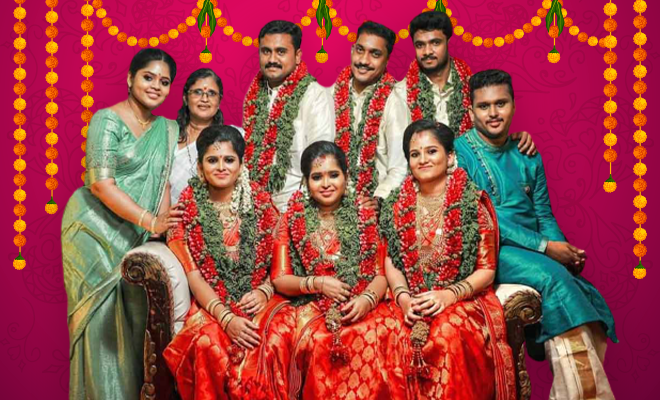 Three Sisters From Kerala’s Quintuplets Get Married Together. How Adorable Is This?

Not that I think about it a lot, but whenever I do think of my wedding day I get very excited and jittery. I might not be the most traditional girl, but I still want all the conventional things. Although, I don’t think I would be able to stand it if someone I had to share my special marriage day with someone, even if they were my siblings. I would want all the attention. Which bride wouldn’t, right? However, this didn’t seem to be the problem when three sisters from Kerala got married together. Awwww.

Reema Devi, a single mother from Thiruvananthapuram’s Pothencode was on cloud 9 as three out of her quintuplets got married in Guruvayur on Saturday. All three of them look radiant in red Kanchipuram silk sarees and similar gold ornaments. They had a small, intimate wedding due and followed all the COVID 19 protocols.

The wedding of four of Reema’s daughters was fixed in April. But they had to be postponed due to the pandemic. Over the weekend, three of them Uthra, Uthara and Uthama got married. Uthraja’s wedding is scheduled for November because her groom, who is in the UAE, couldn’t reach in time.

Also Read: This Bride Helped A Groomsman Propose To One Of Her Bridesmaids At Her Own Wedding. I Wouldn’t Like That

Thrice the happiness: Three sisters from Kerala’s quintuplets get married. (Thr fourth sister's wedding had to be postponed for a bit) I am glad to read this story! https://t.co/4K5emegVmV

Speaking to TNM, Uthara said that her mother was elated yesterday as three of them got married. She said, “Amma was the happiest yesterday. She has struggled a lot for us. She planned the whole thing and wanted it to be a grand wedding. But we had to limit the celebrations due to the current situation.” Further adding, “All these years we’ve done everything together. So, we also wanted to get married together. We put up matrimonial ads at the same time. The weddings were fixed for April, but we had to postpone. Uthraja’s wedding will happen next month. Even though we’re going to live separately, all five of us will be together in our thoughts.”

You see in 1995, Reema gave birth to quintuplets- fours daughters and a son. The five had made headlines when they were born and through their life, the media had been covering their journey. However, when they were 10, they lost their father, Premkumar. After that Reema struggled to make ends meet. The state government gave her a job at the district cooperative bank in Pothencode. With that income, she did the best she could for her children. Uthara is a web journalist, Uthra is a fashion designer, Uthraja and Uthama are anaesthetic technicians while Uthrajan is a BBA graduate.

How adorable is it that three sisters out of five siblings get married together? What are the odds of that happening? This story really put a huge smile on my face.

This Bangladeshi Women Cricketer Bride Pulls Off A Cricket-Themed Wedding Photoshoot In A Saree. She Has Everyone Bowled Over.