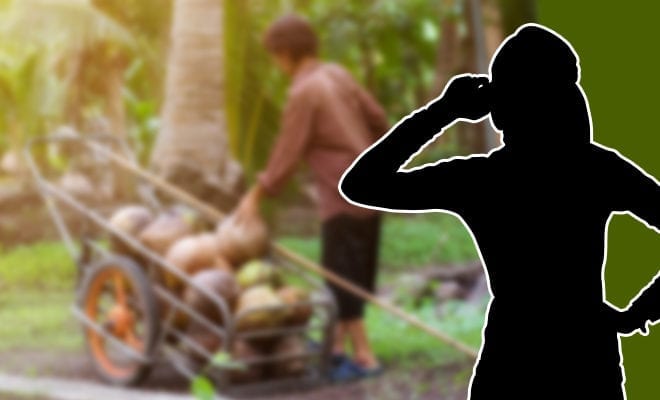 Generally, I feel like Indian men make for extremely distant fathers. It’s no secret that most of the child-raising responsibilities fall on women. Most men are utterly oblivious. In fact, they don’t even know how old their child is or what it is that they’re studying. For most kids, their father is an authority figure to fear. However, I have a very different relationship with my father. He is my friend. We joke around, cuddle and talk about everything under the sun. My father is also the reason I am extremely pampered and a little spoiled, much to my mother’s dismay. So today, when I saw this girl’s tweet about how her dad bought her numerous coconuts after she casually mentioned that she had a hankering, I related to her instantly.

RJ Ira took to Twitter to talk about a wholesome moment between her and her father. In her tweet, she said that she told her father that she wanted naryal paani and a few hours later, he bought her a crate full of coconuts and a bunch of bananas. Her tweet has gone viral and netizens are sharing stories about their own special bond with their fathers. We are loving this.

Told my dad that I wanted naariyal paani. Here’s what I found in my balcony a few hours later: pic.twitter.com/AQnUF1C4pj

Also Read: This Woman From Andhra Pradesh Was Elected As The Village Sarpanch Merely Hours After She Gave Birth To Her Daughter. It’s A Wholesome Story

RJ Ira’s tweet read, “Told my dad that I wanted nariyal paani. Here’s what I found in my balcony a few hours later.”

Father’s might not be as expressive. They might not constantly hug or even hover around you. But they do these adorable little things that tell you just how much they love you. My own father does this thing where he will make me coffee every morning when he makes his own chai. It’s a small gesture but it’s so incredibly thoughtful.

These tweet is winning hearts all over social media. People are lauding RJ Ira’s father and sharing their own stories. Take a look at some reactions:

I’m a general conversation post lunch I just mentioned, Feel like having a scoop of coffee icecream & by dinner this is what I see. Fathers I tell you ❤️ pic.twitter.com/2vCWktFynQ

Back when I was living in Hyd, one day I told my dad m out of namkeen (yes..m an Indori! ) . The next day I received a whole bag full of my fav namkeen 😋😊

Old Couple Visiting Their Newborn Grandchild, With Their Dog, Through A Glass Door Is So Wholesome