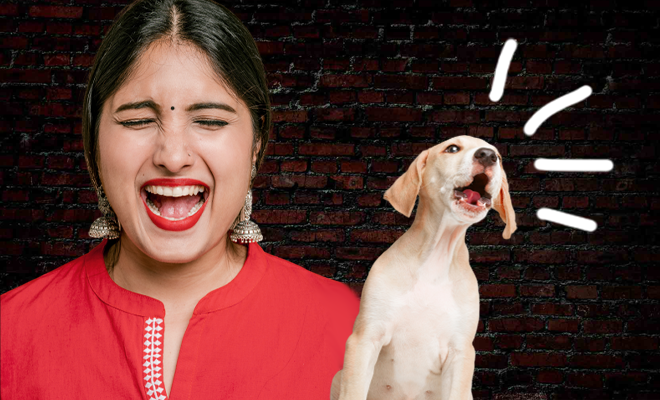 This Woman Was Saved By Her Doggo When A Shirtless Stalker Broke Into Her House. What A Cute Guard

In the last few months, the number of sexual assaults in our country has gone way up. That is not secret. We have had multiple conversations about this. Not to mention various state governments are now prioritising women’s safety. It’s become the epidemic withing this pandemic. However, it seems like the best way for women to keep themselves safe is to get a dog. No, this is not a joke. You see, a dog in Mumbai saved its owner from sexual assault. Ladies and gentlemen, I have found the cutest bodyguard ever!

This 33-year-old woman, a widow, lives with her seven-year-old daughter in Powai. She was being stalked by a man identified as Sadar Alam. He often followed her and wanted to befriend her. Needless to say, she always turned him down and rejected his advances. Of course, since men are physically incapable of handling rejection, his ego was bruised and he was furious. So, he tried to break into her house and sexually assault her.

On Tuesday, Sadar broke into this woman’s house at around 3:45 am. Reports say he was shirtless and was there to allegedly sexually assault her. However, as soon as he entered her house, the woman’s dog started barking incessantly. This obviously warned the woman who was able to safeguard herself. Go doggo!

Also Read: This Politician Said Something Spectacularly Stupid About Sexual Assault But Refuses To Apologise. We’re Not Surprised

A 33-year-old woman in #Mumbai has accused a 25-year-old man of illegally entering her house with an intention to sexually assault her in the wee hours of Tuesday.https://t.co/oyKSVRMi4H

Reports quoted a police officer saying, “As soon as he stepped inside, the dog started barking. The woman, who was on the mezzanine floor, found the man at her house in shorts.”

The woman raised an alarm and the accused was forced to flee from the scene. She lodged a complaint with the police who charged this man for stalking and house trespassing. And now, the accused has been arrested.

If the dog wouldn’t have started barking, the woman would’ve never been able to raise the alarm. What a good boy he must be! This is why all state governments should give every woman a dog for their protection don’t you think? Don’t judge me, I know it’s not a viable solution but hey, a girl can dream.

Okay, jokes aside. Not every woman is lucky enough to be saved by their dogs. Some action needs to taken against the rising number of sexual assaults. Also, can no man accept rejection? Do have to get all butt hurt and vengeful?

Anyway, at least this story had a good ending. Doggo to the rescue!

In Bengaluru, This Woman Was Sexually Assaulted In A Bus By The Conductor. Her Presence Of Mind Got Him Arrested. She’s So Brave