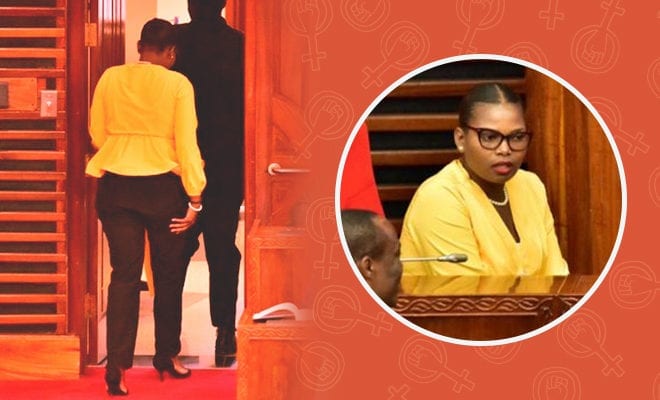 This Woman Politician Was Kicked Out Of The Parliament Because She Was Wearing Trousers. It’s No Better In India

When you’re a woman living in a country that follows the oppressive patriarchal system to the letter, there are a more than few things you learn the hard way. One of those things is that no matter how accomplished you are, you will always be judged for your clothes. I can’t remember the number of times I have been stared at or called out (sometimes by my own family) for wearing a top that shows some cleavage or a skirt that reaches my mid-thigh or even jeans that are too tight. When you’re a woman, your personal choices aren’t yours. Even something as simple as what you can and can’t wear is decided by men whose job it is to further the patriarchy.

Most recently, this kind of inane fashion policing occurred in Tanzania, Africa. On Tuesday, a female Member of Parliament (MP), Condester Sichwale, in Tanzania was asked to leave the National Assembly because a few male members of parliament claimed her trousers were too tight. This incident has sparked a social media agitation. And rightly so. It’s abhorring that even in 2021, in the midst of a raging pandemic, women are still getting called out for what they wear.

It all started when a male member of the parliament, Hussein Amar, began talking about women’s clothing and said that the way women dress is often inappropriate. He then personally called out Condester Sichwale and said, “Mr Speaker, an example there is my sister seated on my right with a yellow shirt. Look at the trousers she has worn, Mr Speaker.”

Speaker of Parliament Job Ndugai threw her out for wearing 'non-parliamentary attire'.

Also Read: Politician Dilip Ghosh Is Offended By Mamta Banerjee Showing Legs In A Saree Which Is Not Bengal’s Culture. Erm, What?

Following Hussein’s misogynistic comments, the speaker, Job Ndugai, asked Condester Sichwale to leave the Parliament and come back only when she is properly dressed. He told her, “Go dress up well, and…Join us back later.” Seriously, what is this rubbish fashion policing? How do Condester Sichwale’s trousers matter if she is good at her job? It’s utterly infuriating that women are often reduced to their clothes.

Hussein later argued that the parliament was a ‘reflection of society’. He also said that the Parliament’s rules strictly forbade women politicians from wearing tight jeans or trousers. This incident is a blatant show of sexism that no one should stand for. Other women MP’s like Jacqueline Ngonyani and Stella Manyanya have demanded an apology. They are claiming that there was nothing wrong with the way Condester Sichwale was dressed and that this was an unfair move.

Needless to say, I completely agree. It was an unfair move to ask her Condester Sichwale to leave all because she was wearing trousers. But the fact of the matter is that women, all around the world, are subjected to this kind of fashion and moral policing. That’s just how the patriarchal cookie crumbles. In fact, there have been numerous instances of fashion policing with our own female politicians.

And its us again
1st day at Parliament @nusratchirps pic.twitter.com/ohBalZTJCV

Who remembers when Nusrat Jahan and Mimi Chakraborty were heavily criticized and trolled for wearing western formals to the Parliament? There was also the time when Nusrat Jahan became meme fodder because she wore a saree, a mangalsutra and sindoor to the Parliament. A fatwa was issued against her for this. Basically, there is absolutely no escaping this clothing-based judgement. Till today Nusrat Jahan and Mimi Chakraborty aren’t taken seriously as politicians because of the way they dress.

In another incident, Smriti Irani was judged for the size of her bindi by Jaideep Kawde, the People’s Republican Party leader. He said, “Let me tell you a thing about Smriti Irani. She wears a big ‘bindi’ on her forehead and someone told me that when a woman changes her husbands frequently, the size of her ‘bindi’ keeps growing.”

A more recent example though comes from Dilip Ghosh, the West Bengal BJP President. In March, he called out CM  Mamata Banerjee for showing her legs in her saree. He said that if she has to put her “broken leg” on display for votes, she can very well wear consider wearing ‘bermuda shorts’, which help people see it clearly. How derogatory and misogynistic is this?

Women need to be judged based on their accomplishments. Their wardrobe choices should not matter. Especially not in the Parliament.

Nusrat Jahan Issued A Fatwa For Wearing A Saree. Can We Just Let These Women Wear What They Want?