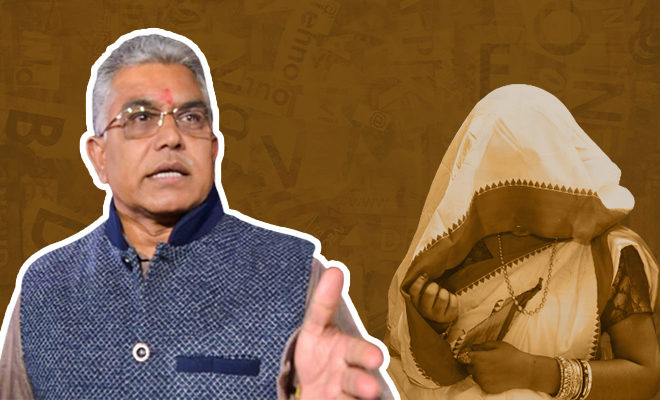 A closer and deeper look into human anatomy would allow you the grasp that legs are a part of the human body. The biggest muscles in our entire body, they are what support us in everyday activities. While we already knew how integral they are to our functioning, that they are crucial in upholding the culture and values of a country, along with protecting a woman’s modesty was a fact that was only recently established.

The infamous #RippedJeans remark was only starting to die down and now a rather controversial statement has been made by West Bengal BJP president Dilip Ghosh where he said that a woman in a saree flaunting her leg is not a reflection of the Bengali culture, we are getting a whiff that the society is apparently deeply obsessed with women’s legs. And not in the way we thought.

This after repeated and similar remarks being made by men in power, where they feel deeply offended by the show of women’s legs and knees. Following the lead of Uttarakhand CM Tirath Singh Rawat, was Dilip Ghosh, the West Bengal BJP President who called out Mamata Banerjee over her injured leg, saying that if she has to put her “broken leg” on display for votes, she can very well wear consider wearing ‘bermuda shorts’, which help people see it clearly.

A comment that didn’t quite sit right with the people in the first place, was then supported by an even poorer argument where Ghosh said, “Being a woman chief minister we certainly expect from her some decency that goes well with the culture and tradition of Bengal, and with the values of a Bengali woman.” Sadly, that wasn’t all. He continued to say, “However, here we can see a saree-clad woman who is flaunting her leg frequently. Do you consider this as a reflection of the culture of Bengal? I have protested against this (at the meeting).”

Not like we were running short of men who found ways to measure the upkeep of a culture or traditions based on how much of a woman’s leg is visible, but just like that we had another misogynist added to our long list. A view that was synonymous with a lot of other people who felt enraged by his comments.

. #BengalElection2021
Their eyes and mind are always below the belt.

Actor-turned-politician Nusrat Jahan said, “Misogyny and the need to control women as per the wishes of men is so deeply embedded in BJP leaders that it’s a matter of national concern now,” where as the Trinamool Congress said that the BJP president has gone on to further defend the insult he directed to the “daughter of Bengal” and that the people will punish the “misogyny”.

Once again the onus of protecting the culture and upholding values of a system fall upon the shoulders of women, while men get to sit back and enjoy hurtling insults at women and moral policing them over what they should wear. How about you mind your own wardrobe and business?