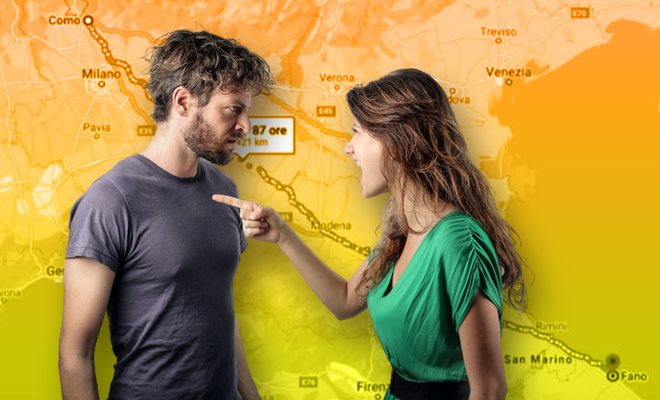 This Italian Man Walked 450 Kms To Cool Off After A Massive Fight With His Wife. We Think It’s Funny

What do you do when you get into a massive fight with your SO? Yell? Walkout? Break all the crockery in the house? I usually go with one of the most classic methods-silent treatment. However, today I came across an incident about this man from Italy and how he chose to recuperate after having a major showdown with his wife. It had me in splits. Apparently, he left the house and walked around 450 kms without realising it. Oh, the worst part? He got fined for braking Italy’s COVID protocols. I don’t know if I feel bad for him or admire his stamina.

The unnamed 48-year-old man hiked for a week to calm himself down after a huge fight with his wife. He started out from Como, where he resides, and managed to make it approximately 450 kms miles south to a beach resort in a small town on the Adriatic coast called Fano.

He was caught by police officers at 2 am for breaching Italy’s COVID lockdown which restricts movement between 10 pm and 5 am. Even the authorities did not believe he walked so far. Why am I not surprised? It was only after they put his information in their database and found a missing complaint that was lodged by his wife a week ago, that they believed him.

Also Read: 101-Year-Old Italian Woman Has Lived Through The Spanish Flu And WWII And Now Has Recovered From Covid Three Times!

"An Italian man exasperated by an argument with his wife walked for 280 miles to calm down before being caught by police enforcing the country’s strict lockdown." https://t.co/qooKuEOmPw

According to reports, when the man was caught he was cold and tired. He admitted that he had gone for a long walk to clear his head. Erm, how did not realise he had been walking for a week? Most people feel like Hercules when they walk one kilometre. That’s me, I am one of those people. This man must have some powers. Although, I can’t help but wonder what the fight must’ve been about. He walked 450 kms in a week, without realising it, to clear his head. If that isn’t madness that makes you laugh, I don’t know what will.

The man said that during this iconic walk, he would get food from strangers and cover nearly 40 miles a day. After his wife came to pick him up, she confirmed that he really had stormed out of their house in Como a week ago and hadn’t been heard from since. She also had to pay a fine of €400 (Rs 35,813) for breaching the lockdown curfew. That was really one pricey fight.

No matter how bizarre this is, it not okay to break COVID protocols for any reason. Even if you’ve had an epic fight with your partner like this man had. We’ve got to follow precautions and curfews if we want this nightmarish pandemic to end.

A Woman Auto Driver Drove Over 140 Kms To Drop A Recovered Covid Patient. She’s An Inspiration

GET HAUTERFLY IN YOUR INBOX!
Related ItemsfeatureTrendingItaly coronavirusCOVIDman walks for 280 miles to cool off after fight with wifeman fined for breaching covid protocol in Itlay