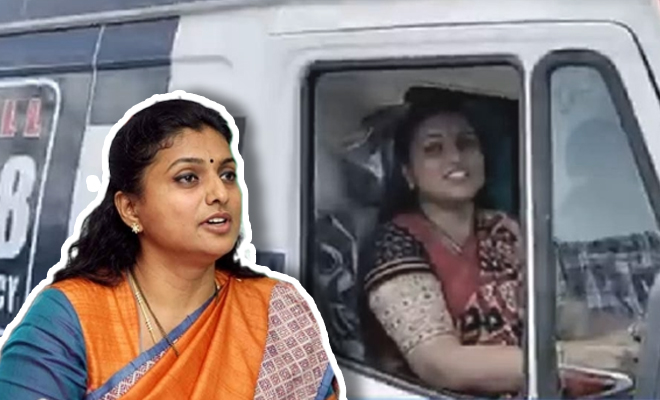 This Female Politician Received Flak For Posing For Pictures In An Ambulance Instead Of Dispatching It For Emergencies. This Is Your Priority During A Pandemic?

As a millennial, I am often told how my generation is obsessed with clicking pictures and capturing moments, than actually living them. We are told that we live for the gram, and to be honest, it’s not entirely untrue. Clicking pictures of everything from our food to clothes to the weather has become almost second nature to us. Because if you didn’t click it, it didn’t happen! As was the philosophy of actor-turned politician and YSRCP legislator RK Roja, who too may have been bitten by the camera bug. Except that she took it a tad bit too far.

With the number of cases being reported in the Nagari district of Andhra Pradesh increasing by the day, it was decided by the government to induct 412 new ambulances to the existing fleet, to ensure that there are enough of them to reach out to patients and take them to the testing centres. And so, adhering to the orders was MLA from the constituency, R K Roja. She was snapped on Tuesday, driving a newly inducted 108 ambulance, not to the destination it was supposed to arrive at, but because she was posing for pictures.

At at a time when every second is crucial, for her to not just delay the process of induction of the ambulances, but also make the hospitals and centers wait till she had enough pictures clicked, was infuriating to say the least.

Also Read : In A Case Of Extreme Negligence, 57 Girls At A Kanpur Shelter Were Found Covid Positive, 7 Are Pregnant, And 1 Is HIV+

a video clip of YSRCP MLA R K Roja driving a newly inducted ambulance and posing for photos and videos has gone viral. Amidst the pandemic, people are complaining about non-availability of ambulances. pic.twitter.com/lcnxJiiuKH

Instead of dispatching the various ambulances to their designated places to quickly begin catering to emergency calls, Roja held up the ambulances for several hours for all things superficial. And not just this, it was also revealed through public statements that she supposedly held a small welcoming ceremony for them, and urged the people to shower her with flowers as she walked down the borewell. Because, a flower shower > saving people’s lives. And these are the leaders we are talking to about.

However, upon talking to Roja about it, she said, “I did not even know that they were waiting for me to shower flowers. They threw flowers and rose petals in front of me as I walked but I could not say no as I did not want to hurt their feelings.” And whether or not that was her doing, the fact that Roja did not know any better than to stand there posing for the camera than fast forwarding the process was disappointing enough.

Also Read : Kanupriya Mal Set Up A Website To Help Find Plasma Donors For Covid-19 Patients After Her Parents Tested Positive. This Is Inspiring