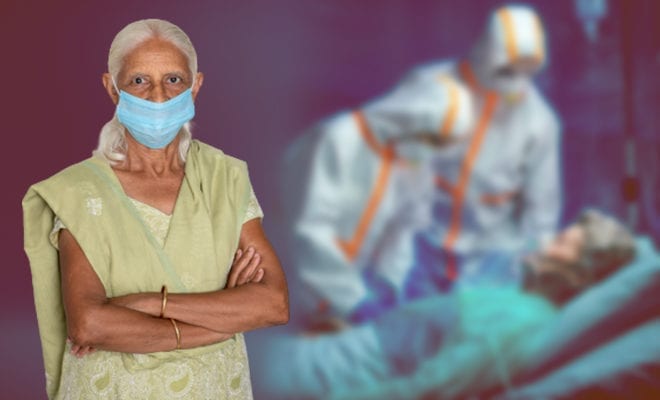 Last year, this time, the coronavirus was just getting started. No one in their right mind thought that the pandemic would last as long it has or claim as many lives as it has. The worst part is that a year into this mess, despite having vaccines, our country’s COVID situation is only deteriorating. Everywhere you look right now, people are trying to arrange for hospital beds or oxygen tanks. Hospitals are turning people away and live-saving medications are selling for three times their MRP. It’s a grim situation, to say the least. But hey, I’ve always believed that it gets worse right before it gets better. Today, I have a new sense of hope and optimism. Do you know why? You see, this morning I read about an elderly woman who, despite having a 95% lung infection, kicked COVID’s ass. This is the only piece of news that I have read in the last two weeks that has made me smile. Hopefully, it will do the same for you.

62-year-old Usha Nigam, a retired manager of a co-operative bank valiantly fought COVID and emerged triumphantly. She has earned praise and love from everyone for beating the deadly virus despite having numerous complications including 95% lungs infection. The doctors treating Usha had told her family there her chances for survival were next to nil. But after spending 80 days on oxygen and 50 days in the ICU, she has made a marvellous recovery and has finally returned home.

Recently, Usha Nigam lost her sister. She travelled to Dewas to be with her family but when she returned, she began complaining of a cough and fever. Soon she was tested and was found COVID positive. She was admitted to Madhav hospital’s Covid-19 ward in Madhya Pradesh.

On 24 October, Usha had her first CT scan which showed no sign of lung damage. But soon after her condition worsened and she was transferred into the ICU. Despite getting six remdesivir shots, her condition did not improve. Hence, Usha was referred to Sri Aurobindo Hospital in Indore. In the span of eight days, her CT scan showed a 65% lung infection.

Also Read: Four Months Pregnant Nurse In Surat Has Been Attending To Covid Patients While Observing A Fast For Ramadan

As her condition deteriorated, her family became her biggest strength. They did not let her lose hope. Her sons and daughters-in-law would put on PPE kits and stay with her in the hospital to keep her encouraged. She began eating home food and getting regular remdesivir shots but nothing seemed to be helping much. The doctors claimed she didn’t have much time. But her treatment continued. Miraculously, on 12 November she was finally COVID negative.

However, Usha wasn’t out of the woods just yet. A few days after she tested negative, another CT scan showed that her lung infection was at 95%. On 2nd December, Usha’s family, with full oxygen support, took her home. She was on complete oxygen support till 20 February. And then Usha made a miraculous recovery. Now, she is completely healthy.

Usha credits her doctors at Madhav Hospital in Ujjain and Sri Aurobindo Hospital in Indore for her recovery. She also said that her family was her biggest support system Her sons and daughters-in-law took full responsibility and did all the domestic chores. They even spoon-fed her when she was bedridden. How sweet is this?

A few days ago, Madhya Pradesh Chief Minister Shivraj Singh Chouhan congratulated Usha on her recovery. According to reports, he said that proper treatment, family’s affection and strong will played as a base in this win. Well, we can’t say we disagree!

After reading about Usha Nigam’s critical condition and then her amazing recovery, I can’t help but feel optimistic. Well, at least a bit more optimistic than I was earlier. This pandemic will come to an end. But until then, we just have to stay home and take all the necessary precautions.