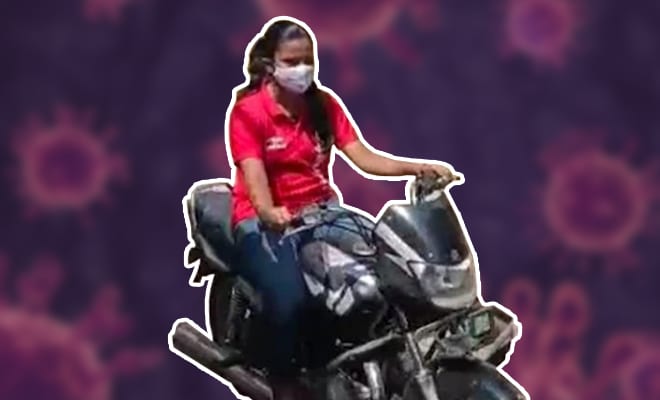 People in India have been obsessed with having sons since the beginning of time. They believe that a son will lead their family to fortune and wealth while a daughter is merely a burden since the day she is born. And even though this regressive thinking has been proved wrong on numerous occasions, our society refuses to let go of these inane and gender-bias fixations. Today, we are talking about a girl from Odisha who challenged this problematic mentality. She gave up her studies and became a Zomato delivery agent to provide for her family after her father lost his job due to the pandemic. How admirable is this?

18-year-old Bishnupriya from Odisha’s Cuttack district readily gave up her studies and put a pin in her dream of becoming a doctor when her father lost his job amid this pandemic. She started working as a Zomato delivery agent to support her family during these tough times. After her father lost his job as a driver, Bishnupriya’s family dipped into their savings. However, once that was exhausted, it had become a task for her family to even put full meals on the table.

Seeing her father helpless and struggling to cope with life, Bishnupriya, who is the oldest among her 3 siblings, took the decision 2 keep her studies on the back burner for some time, help her father in supporting the family and joined @zomato @IndiaTodayhttps://t.co/d7KJwq8EGm

Also Read: This Daughter Worked Hard So Her Mother Didn’t Have To Be Dependent On Her Dad For Simple Pleasures Like Shopping

In an attempt to support her family, Bishnupriya, who is the oldest among her three siblings, contacted the local Zomato office and got hired as a delivery person. However, the job came with its own risks and dangers. Her job included travelling and delivering food late and at night. She also had to learn how to ride her father’s motorcycle in order to do this job. In the end, it all worked out and Bishnupriya became the first food delivery girl in the Cuttack district. Her courage and determination are inspiring!

However, being a Zomato delivery agent isn’t all Bishnupriya does. She also gives tuition to her neighbour’s kids. She told India Today TV, “I was studying in Class 12 with science stream. I wanted to become a doctor and serve humanity. Since my father lost his job due to lockdown, life has become tough since then.” She added “As my father has three daughters and I am the eldest, I took the decision to come out and help my father. No work is small and I will try my best to keep my family happy and make sure my younger sisters continue their studies.”

This is proof that if you give your daughter the opportunity she too can provide and take care of the family. More power to Bishnupriya!

2-Year-Old Girl From Chhattisgarh Can Recite The Capitals Of All The Nations. This Is Impressive