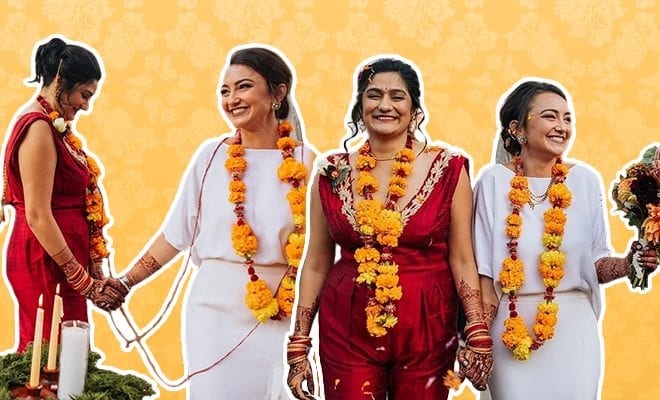 Through the entire pandemic, on most days, I have woken up to bad news. Women being raped, murdered or conned by dubious people. While, thanks to our courts, it may seem like we’re moving forward, our policies, a few of our laws and the prevalent mentality in our country are still extremely regressive. All this put together has made me accustomed to always assuming the worst and adapting myself to the plethora of bad news coming my way. Today though, when I was scrolling through, looking for a relevant article, I was pleasantly surprised. Okay, I was ecstatic. I stumbled upon an Instagram post featuring two Indian women getting married in a gorgeous same-sex ceremony in Virginia, USA. What I would give to be an attendee at this wedding.

Sarika Modi and Gera Ruth have caught our attention because of their stunning pictures from their wedding. From their love story to their bridal outfits, it all had me nearly in tears. Sarika and Gera had an intimate outdoor wedding ceremony at a Potter’s Craft Cider club in Virginia, USA. Looking at them made me wish India allowed same-sex marriages so the LGBT community can be with the person they love and be as happy as Sarika and Gera are.

Both the brides donned in outfits that represent their religion. Sarika, being a Hindu, wore a red jumpsuit while Gera wore a gorgeous white gown with a veil. Both of them had applied mehendi and worn bangles. I don’t think anyone who attended the wedding could take their eyes of these two. I certainly can’t stop scrolling through their pictures and well, stalking them.

Also Read: Taiwanese Military To Feature Two Same-Sex Couples In Its Annual Mass Wedding Ceremony. This Is A Landmark Move

Their wedding was very unique. Not because it’s not an everyday sight to see a same-sex wedding but because they had added their own cutesy little elements to it. For instance, Instead of the traditional havan kund, they lit unity candles and took 4 pheras around it. Sarika and Gera also did the varmala ceremony and they both adorned mangalsutras. Their wedding was followed by a reception where all the guests wore masks and followed strict COVID 19 protocols. It was all so beautiful. Sarika and Gera have really melted my heart.

But it wasn’t an easy journey getting here. A few days ago, Sarika took to her Instagram to share her heartwarming coming out story. It’s never easy to tell your Indian parents that you’re queer. There’s always a chance they won’t understand or accept you for who you are. But thankfully, Sarika’s parents didn’t react poorly. In fact, they accepted her with open arms.

On Instagram, Sarika wrote, “At 32 I was about to tell my parents the scariest thing I had ever told them about myself. Mom and Dad, “I’m attracted to women.” Without missing a beat my dad replied, “You’ve seemed so much happier and I’m happy you’re accepting who you are.” It was such a beautiful moment of love and acceptance from my parents. My mom told me they just wanted me to be happy.”

Further adding, “I had been so scared after I had said those words. I had hidden who I was from everyone including myself for so long. Being Indian growing up in the south had its own challenges and I definitely did not know of any Indians who were gay or queer when I was younger. Three years later my parents gave my amazing wife @gera.ruth and their blessing as we touched their feet for the first time as a married couple.”

Hopefully, after reading about Sarika and Gera, more people will be accepting of their queer friends and family. We need more compassion and acceptance in the world. The two brides look so gorgeous, overjoyed and in love. I don’t understand how anyone can be against that? We’re so happy for them and hope that India soon allows same-sex couples to tie the knot.

Centre Opposes Plea To Recognise Same Sex Marriage, Says Only Husband And Wife Make A Family. This Is Unfair!