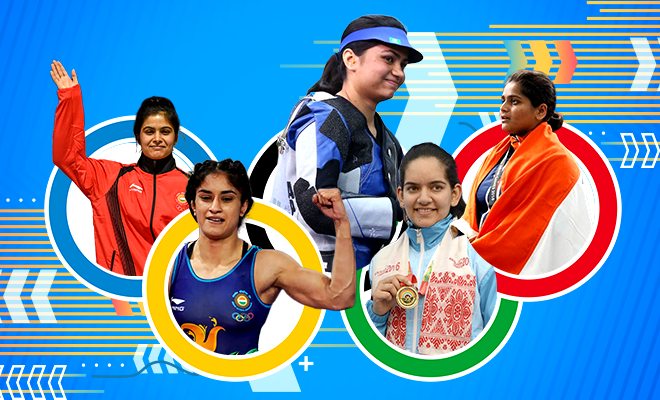 These Sportswomen Have Already Secured A Spot At The 2020 Tokyo Olympics. They’re Already Champions!

I have never been a sports fan. I barely understand cricket and that’s a religion, so having knowledge about the Olympics is out of the question. But the more I read about the Indian team that has already qualified for the 2020 Tokyo Olympics the more I want to know. They are talented, decorated and have records that can put anyone to shame and we are immensely proud of them.

Though some of our star athletes are still qualifying, we have curated a list of all the women athletes that have already clinched a spot for the Olympics. These women right here are our best bets at a podium finish so read carefully.

Ace Archer, Deepika Kumari is currently ranked at number 9 at the World Archery Rankings. The 25-year-old stellar sportswoman is a former number 1. Her list of achievements is mind-boggling, from winning two medals at the 2010 Delhi Commonwealth Games (one in the individual event and one in the women’s team) to receiving an Arjuna Award in 2012, she really is a player to watch out for. You might remember her from the 2016 Rio Olympics where she and her team finished 7th in the ranking round. We hope she ends with a podium finish this time around.

Also Read: Dear Ravindra Jadeja, Your Comment Was Sexist. And To Prove You Wrong, Here Are Images Of Women Casually Lifting Weights

One of India’s biggest medal hopes (no pressure), Vinesh Phogat became the first Indian wrestler to qualify for the Tokyo 2020 Olympics. She comes from a family of wrestlers with her cousins Geeta Phogat and Babita Kumari being international wrestlers as well. Also, the family that got featured in Dangal. And just like her family, Vinesh too is a decorated wrestler. She won the gold medal at the 2014 Commonwealth Games, a bronze medal at the 2014 Asian Games and another gold medal 2018 Commonwealth Games. She is also the first Indian woman wrestler ever to win a gold medal at the Asian Games in 2018. I can’t wait to see what she does at the 2020 Tokyo Olympics.

Apurvi Chandela is another force to reckon with at the 2020 Tokyo Olympics. She is one of 15 ace shooters that India is sending to Tokyo this year. Recently, she won the gold medal at the 2019 ISSF World Cup in New Delhi. In 2014, she also won a gold medal in the Commonwealth Games. At the 2018 Asian Games, she paired with Ravi Kumar for the 10 M air rifle mixed team event and won the bronze Medal. We are extremely excited to see her finish at the podium this time.

Also Read: Shooters Apurvi Chandela And Anjum Moudgil Secure Medals. The Women Are Getting Us The Glory

Anjum, a record-breaking shooter hails from Chandigarh and is also a sub-inspector with the Punjab Police. She is currently at the number 2 spot in the women’s 10M Air Rifle ISSF rankings. Anjum has won many accolades including a silver medal at the Commonwealth Games in 2018. She also secured a silver medal at the ISSF World Championship in Changwon, South Korea in 2019. Thanks to incredible women like her, India might just bag a few medals this time.

After bagging a gold medal in the ISSF World Cup in Munich, Rahi became the first Indian shooter to qualify for the 25 M pistol shooting event in the Olympics. In 2018, she became the first woman to win a gold medal for India in shooting at the Asian Games. She has also won two gold medals at the 2010 Delhi Commonwealth Games and then again at the 2014 Commonwealth Games. Rahi’s record is impressive, to say the least, making her one of our highest hopes at the 2020 Olympics.

Manu secured her 2020 Olympic spot by finished fourth at the ISSF World Cup in Munich. Let me just point out, she is 17 years old and has managed to accomplish so much more than people can in a lifetime. She bagged a gold medal at the 2018 Commonwealth Games and the Asian Games. At the Youth Olympics in 2018, Manu became the first shooter from India and the first female athlete from India to clinch a gold medal. There is no doubt in my mind that Manu will finish at the podium during the 2020 Olympics, my bet is definitely on her.

If you are wondering why star badminton players PV Sindhu and Saina Nehwal are not on this list, you should know they are still in the middle of their qualifying rounds. Though their prospects look good until April nothing definite can be said. Though here’s hoping they qualify since that will double our chances at winning more medals.

These women are all supremely talented and they are our best bets at winning multiple medals at the Olympics this year. Much more power to them!

This is a developing story with many women sports stars still in the qualifying rounds. We will be updating this story as it happens.