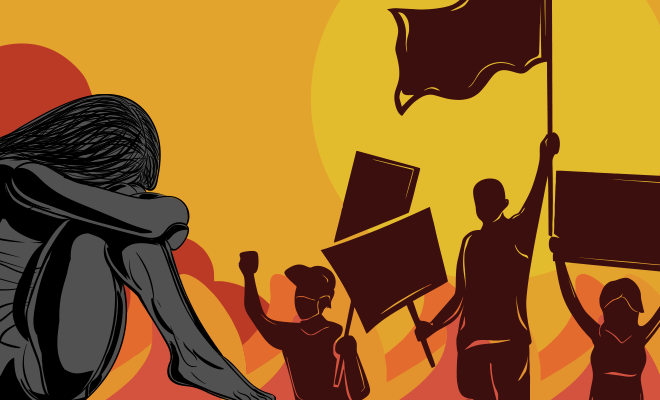 The UP High Court Has Said That The Cremation Of The Hathras Victim By The Police Was A Violation Of Her Human Rights. This Gives Us A Glimmer Of Hope

Unless you have been living in a land with no newspapers, TV or internet access I am sure you know all about the horrifying Hathras rape case. A 20-year-old girl was raped, tortured and left for dead by four men. After the incident, the brave girl fought for her life for two weeks but it was a lost battle. She succumbed to her injuries on 29th September making her yet another one of India’s unfortunate daughters. There were protests. People were extremely riled up. The police tried to cover it all up by cremating the body in the dead of the night while her family were locked in their house, not allowed to attend her funeral. Not to mention, the case was politicized very quickly. No one thought the Hathras victim would get any justice. That is, until now. You see, the UP High Court has condemned the way she was cremated and called it a human rights violation. Ladies and gentlemen, this is a small victory that no one saw coming.

Before you’ll start the celebrations, let me elaborate. The High Court in UP said that the way the 20-year-old Hathras rape victim was cremated by the state authorities, even though it was claimed in the name of law and order, was a human rights violation of the victim and her family. The court said that the cremation, “is prima facie an infringement upon the human rights of the victim and her family”.

This was said in yesterday’s court hearing in which the court was assessing how the police handled the entire case. Including the secret hush-hush cremation of the victim. The court said the woman was, “at least entitled to decent cremation in accordance with her religious customs and rituals, which essentially are to be performed by her family. Cremation is one of the ‘Sanskars’ i.e., antim sanskar (funeral) recognized as an important ritual which could not have been compromised taking shelter of law and order situation.”

First of all, we have to appreciate that the UP high court is examining the role of the police and not just sweeping it under the rug as we had expected. They are taking into consideration that the victim should’ve had a proper funeral with her family present rather than the police cremating her at 2 am with no one’s consent. However, the main problem of this case is, surprisingly, not the role of the police but the fact that the accused are four so-called “upper-class” men. Which means everyone who is even remotely involved is trying their hardest to prove that the men are blameless and everything that happened was the Dalit girl’s fault. Yeah, it’s messed up but it’s the way our world works. No matter what, people will not blame the men.

The court also touched upon this. The judges also warned against character assassination of the 20-year-old. “No one should indulge in character assassination of the victim just as the accused should not be pronounced guilty before a fair trial.” I think this is one of the very few times the court has recognized victim shaming and called people out on it. This gives me so much hope!

Also, maybe the court should now call our politicians personally and tell them to not assassinate the victim’s character. Specifically, Barabanki BJP leader Ranjeet Bahadur Shrivastav needs to hear an earful on why shaming the victim is so sickening.

Anyway, the reason that the judges had to warn people against shaming the 20-year-old girl is that people have already started to spin tales that are in the favour of the four alleged rapists. You see, the community, to save these “upper class men” is claiming that one of the men had been in a relationship with the victim. And it was her family that was involved in her death. They are trying to play it off as an honour killing. Because that is easier for people to accept than the fact that four men raped, tortured and murdered a Dalit girl. My blood boils just thinking about how these “community members” are trying to blame the victim and her family rather than the people who should be blamed, those men.

Hathras victim's late-night cremation was violation of human rights of the woman and her family: Allahabad High Court

Another question about this case that is hanging over all our heads is- was the girl really raped? Now, in an attempt to salvage the situation these men and their community is saying that she wasn’t. The forensic report also negated the possibility of rape. But what no one wants to see is that the report can’t be held true considering the sample was taken days after the alleged incident in the field. Not to mention, the police cremated her body in the dead of the night. The Hathras rape case is literally the worse kind of playing with the law.

Regarding this, the court reminded the police that our rape laws accept a dying declaration from an assaulted woman as a fact. The court told Senior Police Officer Prashant Kumar, “How do you know she wasn’t raped? Has the investigation concluded? Please go through the new rape law of 2013.”

As I said, the fact that the courts are recognizing everything that went wrong in the Hathras rape case is a small victory itself. From the mistreatment of the case by the police to character assassination of the victim and even rape laws, everything that needed to be talked about is being talked about and acknowledged. These are very grim times, indeed. But at least now, we have a glimmer of hope.

Hathras Horror Repeats In UP’s Balrampur. Another Dalit Girl Gangraped And Cremated In A Hurry.