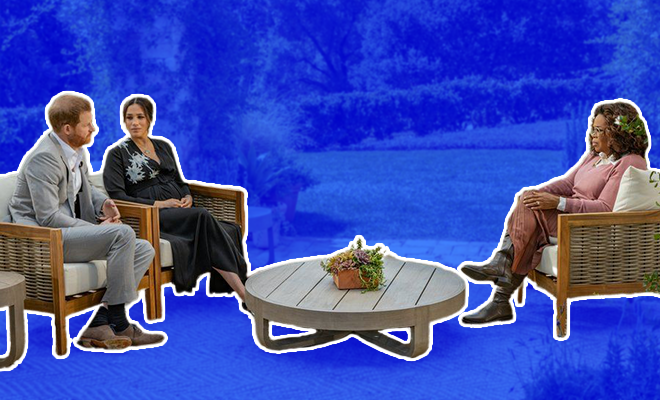 While half the world today is inundated with posts and pictures celebrating the International Women’s Day, the other half is absorbed in a conversation between two such powerful women, who as of this morning, have changed the way people viewed the British monarchy. Dropping several truth bombs, both truth and bomb being the operative words here, the latest interview of American talk show host Oprah Winfrey with Meghan Markle and Prince Harry has taken all of us by storm as the couple went on to speak their truth.

Having gone viral in mere minutes after the interview was taken live, the 2 hour long tete-a-tete was more than just spilled beans. Having stayed mum through a lot on controversies ever since the two were rumored to have tied the knot, the couple has endured a lot. And speaking all about their journey in and out of the royal family, here are a few of the most explosive revelations that were made in the interview.

#MeghanMarkle told Oprah: "three days before our wedding, we got married… we called the Archbishop and said his thing, …is for the world. We want our union between us. "So the vows that we have framed are just the two of us with the Archbishop" An interesting precedent? 🙂 pic.twitter.com/cpEJnkJBL0

“We called the Archbishop and we just said, ‘Look, this thing, this spectacle is for the world,” Meghan revealed. “But we want our union between us,'” shared Meghan as they admitted to having been married secretly in a backyard ceremony officiated by the Archbishop of Canterbury Justin Welby. In fact, the couple also shared that the two exchanged different vows with each other, than the ones televised in the grand ceremony.

“I was ashamed to say it at the time, and ashamed to have to admit it to Harry, especially because I know how much loss he’s suffered,” said Meghan as she revealed how she dealt with suicidal thoughts at a point in time. “But I knew that if I didn’t say it, then I would do it. I just didn’t want to be alive anymore. That was clear and real and frightening and constant thought. I thought it would have solved everything for everyone.”

She went on to say that when she went ahead to seek help from “the institution”, considering her mental health was deteriorating, she wasn’t given any. “I remember this conversation like it was yesterday, because they said, ‘My heart goes out to you, because I see how bad it is, but there’s nothing we can do to protect you, because you’re not a paid employee of the institution.'”

Meghan also went on to point out a picture that was taken on the exact day that she was having suicidal thoughts.

Also Read : Princess Diana’s Story On The Crown S4 Made Me Appreciate What Meghan Markle Is Doing Even More

Meghan Markle has accused the British royal family of racism, saying concerns were raised about the skin colour of her unborn son in an interview with Oprah Winfrey pic.twitter.com/y1DrtLXgOm

“It was not our decision to make,” Markle said. Still unclear about what the actual reason for not giving Archie the title of a prince was, Meghan said, “There [were] conversations with Harry about how dark your baby is going to be and what that would mean or look like.”

She also said, “In those months when I was pregnant … we have in tandem the conversation of, you won’t be given security, not gonna be given a title and also concerns and conversations about how dark his skin might be when he’s born.”

The Brit monarch sidelined Princess Diana before eventually killing her, it sidelined Meghan Markle before she moved out of the brutal palace. Meghan finds her voice, @Oprah releases the revelation of racism and misogyny against Meghan on #InternationalWomensDay pic.twitter.com/vY6pFzFQgp

At one point in the interview, Oprah clarifies with Markle if she felt silent in her time as a royal, or silenced. Markle answered, “The latter.” “It was only once we were married and everything started to really worsen that I came to understand that not only was I not being protected, but that they were willing to lie to protect other members of the family,” Meghan said. “They weren’t willing to tell the truth to protect me and my husband.”

Meghan Markle Shares Her One Regret In Joining The Royal Family In Oprah Interview https://t.co/DhgOViLz1o

Meghan Spoke About Her One And Only Regret

“My regret is believing them when they said I would be protected,” she told Oprah. “And I regret believing that because I think, had I really seen that that wasn’t happening, I would have been able to do more. But I think I wasn’t supposed to see it.”

Speaking about her life now, Meghan concluded by saying, “Now, because we’re actually on the other side, we’ve actually not just survived but are thriving. You know this—I mean, this is miracles. I think that all of those things that I was hoping for have happened, and this is in some ways just the beginning for us.”