The Many Problems We Have With This Ad Masquerading As Empowering. It Is Not. 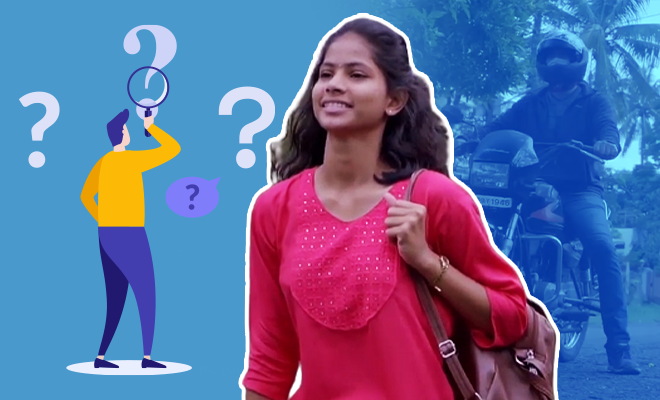 Ever since the Tanishq ad came out and we abandoned all logic and sense and put our might behind taking down an ad, I do not have hopes from people. After wasting numerous hours on a witch hunt of Rhea Chakraborty, we got bored and shifted our focus to taking down an ad that promoted communal harmony. But now, another ad, also for a jewellery brand has come around and is now being hailed as the kind of ads that should be made to promote jewellery. It’s also being touted as being empowering to women and what not. Except, it’s nothing like that. Have a look.

The ad by HS Kalekar jewellers was shared by Viral Bhayani, the one person with a pulse on all things trending. He shared this saying he was reminded of a brave dadi. That’s all well and good but nothing about this ad is brave. It’s worrying. Allow me to explain.

The ad starts off with a girl (not your typical model, and kudos to them for that) walking out of her house where a man on a bike passes by. He goes a little ahead and stops, revving his engine, the intention obvious. He wants to scare her. The man continues to follow her around, her step quickening and you can see fear in her eyes. Then, she spots another woman, hands her bag and confronts him, pulling off some cool moves with a stick. The guy averts his gaze (he’s sorry!?!). And the girl, walks off in slow motion as a voiceover talks about women are goddesses and that they have the power to protect themselves.

So you see the problem? Because despite our protests, we continue to tell women that they have to protect themselves while men, well…, they will continue to be men. So I put this up in the Hauterfly group ( I did think for a second that I was overthinking it) and our team of fabulous women chimed in.

Akanksha Narang, our features head, summed it up nicely when she said, “I understand their intention is to encourage self-defense training but like firstly, just stop with equating us with goddesses. Secondly, it isn’t fuckin’ hunger games. It’s not like become strong or be killed. Yes, it’s good to know self-defense but why can’t you promote the changes men need to make?’

Sadhika Sehgal, our trending head was also pretty vocal about her dislike for this ad. “I get that their intention is to caution us and suggest that we be strong enough to take care of ourselves, which we should do regardless, but we are not goddesses. And we shouldn’t need to do some high level gymnastics or threaten the guy to MAKE him understand he should back off. This way, it implies that perpetrators will then choose helpless victims over ones who have combat training which is nonsense.”

So this ad isn’t controversial. But obviously, it only talks about women and not important things like religion. Or communal harmony. But it certainly isn’t empowering.

Oh, and in case you were wondering, HS Kalekar jewellers are based out of Kolhapur with the address easily available on the internet. Of course, no one is going to turn up there threatening violence, because we’ve never cared about our women that much.