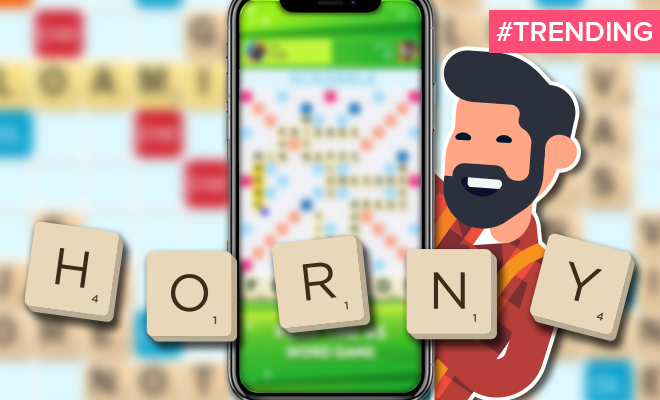 The Latest Way For Creepy Men To Flirt Is On Gaming Apps. Now We Can’t Even Play Online Games Without Being Harassed

Dear women, not like this should come as a surprise to you (more like a daily dose, we’ve unwillingly become used to), but I have some bad news for us all. Turns out, like all the other basic rights and privileges we’ve had to give up- from as simple as wearing what we like, to stepping out at night after 8 pm, we have seemingly lost yet another means of having fun, to the frustratingly annoying and disgusting habit of men where they can’t keep it in their pants and stop themselves from harassing women. Even if it means, online, on a freaking gaming app.

Now, while we’re aware that the world doesn’t offer us much (or any) protection, be it in the streets, in bars, in schools or even at homes, we have now officially been clarified, that it doesn’t provide us protection over online gaming apps like Scrabble Go either. An app that many of us would think to use to make words with highest points, is in fact now being used to make lousy remarks and hit on women users. Clearly the lockdown has had creative breakthroughs even for the creeps out there.

I may be a victim of stereotypes, but as a woman on a betting app like MostBet, I would have expected this, but as it turns out, even simple literary games like Scrabble Go, is filled with perverts that approach women using the game’s chat function. Being widely called as the ‘Romance scammers’, these tribe of men on the internet have found a way to even ruin a game like that of scrabble, by using it to harass women with their constant barrage of messages that start with a ‘hi’, but soon escalate into them flirting shamelessly with women users.

Why do people start a conversation on Scrabble GO? I just want to play scrabble, sir.

Also Read : #Inspiration: This Woman Stood Up For Another Woman Who Was Being Harassed By A Pervert. Onlookers Must Not Be Silent

Several women have come forward claiming that they’ve been bothered by such men, or bots, and have compelled them to stop indulging in these games altogether. One woman spoke with BBC and shared how, “It’s almost like a script.” She further went on to explain, “They start with, ‘How you doing?’ They match you to start a game, then start messaging. They play very badly, so you win the game. And then they big you up. Regularly, they say, ‘I just want to check, can’t we be friends?’. When you say, ‘No,’ some of them disappear, they resign from the game. If you don’t reply at all, most of them resign from the game.”

Words With Friends has turned into Words With Random Strangers, and that seems to have turned it into Tinder or something.

Sorry dudes, I'm not on there to chat. At least no dick picks, thank God.

When the boy you got paired with in Words with Friends tryna flirt with you pic.twitter.com/uk8VoI2QzS

It is also not the first time that women have found their gaming chat boxes inundated with creepy messages from desperate guys, for there have been several instances with other games like ‘Words with Friends’, where similar instances were recorded. One woman also wrote, “I do not like being targeted by creepy men who want to chat not play Scrabble.”

And despite the block function that would allow women to steer clear of such lifeless desperados, the fact that men have now started harassing women over such mediums is scary to say the least. To find out that we can probably be targeted and attacked literally from anywhere, is not just worrisome but also disgusting. At this point, we only have one word for these ‘romance scammers’, and we’d like them to shove it where the sun don’t shine.

Also Read : A Cop Got Suspended For Harassing A Woman By Sending Her Obscene Videos And Texts. Yet Another Officer Misusing His Position