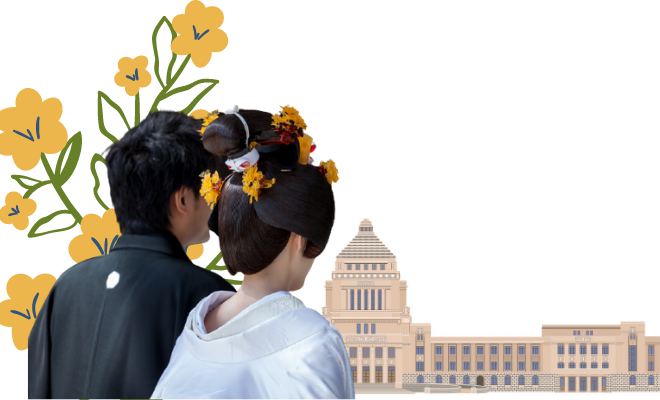 The Japanese Government Is Offering Couples Rs 4.2 Lakhs To Encourage Them To Get Married Early. BRB, Moving To Japan

This year I will turn 24. Which means that my marriage-obsessed relatives will begin interrogating me about prospective husbands. It’s not that I am against marriage, I just don’t want to be tied down so early in life. My reluctance to get married is mirrored by a lot of people my age all over the world. However, to combat this change in mindset, Japan has found an interesting solution. The Japanese government is now offering a buttload of money to young couples who choose to get married.

You see, people in Japan  are unwilling to get married or they are getting married very late in life. That makes it difficult for them to have children of their own. Which is in turn affecting the overall birth rate of the country.

To ensure there is no further drop in their birth rate, the Japanese government is offering up to 600,000 Yen (Rs 4.2 Lakhs approx) to newlywed couples. According to Japan Today, this money is to help them get settled in life, pay their rent and other bills. However, this offer begins from next April and the couples can only chosen for this if they live in a municipality that has adopted Japan’s newlywed support program. What is the procedure to have the Japanese Government start operations in India?

As Japan's ultralow birth rate is attributed mainly to tendency that people marry late or stay unmarried, the government will try to boost marriages by enhancing the program to provide larger sum &cover more couples, said sources at the Cabinet Office. https://t.co/X4PAXSXSpR

If I had a boyfriend, I would probably be on the phone convincing him to move to Japan with me and get married next year. But well, this is yet another thing that us single people have been left out of.

To be eligible for this scheme, both husband and wife will have to be under age 40 as of the registered date of marriage and have a combined income of fewer than 5.4 million yen (approx Rs 37 lakhs).

As of July, only 15% of all cities, towns and villages have agreed to be a part of this program. This monetary incentive will boost marriage rates which will, in turn, boost the number of children being born. It’s ingenious.

Also Read: Japanese Mayor Blames Women For Overcrowding Supermarkets And Says Men Should Go Grocery Shopping Instead. Is There A Vaccine For Sexism?

Another effort to cope with the ultralow birth rate－an economic incentive for newlyweds.

No matter how annoyed I get when my relatives bring up the topic of marriage over and over again, if anyone paid me 4 lakhs to do it, I would be all decked up and wearing a shaadi ka joda tomorrow. Although, I think the Indian government needs to start a similar scheme for the opposite reason. They should be paying people to not have children. It would really things easier on everyone. We think this is a smart idea by the Japanese government to increase the birth rate.

Japan is a gorgeous country with delectable food and beautiful cherry blossoms. Do you think it’s too late for me to apply for citizenship?

A Japanese Billionaire Is Holding A Contest To Find A Woman To Take To The Moon With Him. Because He’s Lonely. Erm, Okay