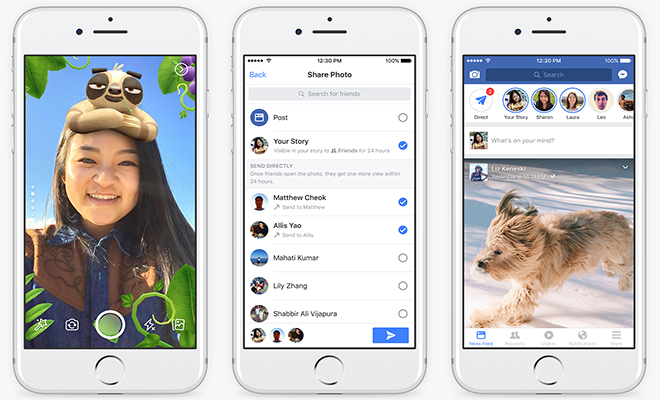 Facebook Rolls Out A New Feature & Its ‘Story’ Sounds Rather Familiar

‘Stories’ is a social media term that started off with Snapchat, then went onto Instagram, only to be replicated by Whatsapp Messenger, and now has been taken over by Facebook. When all the apps on your phone seem to be doing the same thing with a different icon, you just end up questioning technology.

Well, Facebook’s getting on the story bandwagon by adding a similar feature to your News Feed, in an update that is releasing worldwide today. So what does it look like? For one, your News Feed is getting a makeover and the most noticeable change pretty much looks like the story circles that appear on your Insta feed.

Facebook Stories will use the in-app camera, which can be accessed by just tapping the icon that appears on the upper corner of your News Feed screen. Like the pioneering app Snapchat, this feature will come with filters and effects, unlike InstaStories. Each post will last for 24 hours and will not appear anywhere else, other than in your story.

You will also be able to direct message your snap to someone, by just clicking to the left of the ‘My Story’ circle and sharing the image or video with one friend or a limited group of friends. Didn’t we tell you that it sounds familiar?

With all apps pretty much twinning with each other nowadays, it makes us wonder if we should stick to a couple or use them all? Just a disclaimer, Facebook: although we’re going to end up loving your new feature (after hours of complaining about it) the Snapchat doggy filter will always be bae! ALWAYS.