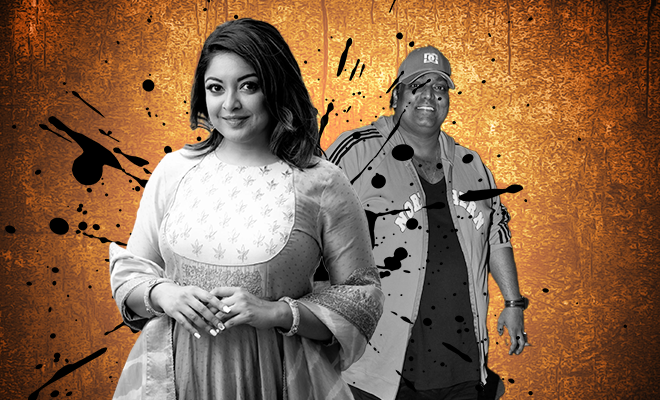 Tanushree Dutta Voices Her Protest For Ganesh Acharya’s Behaviour And Urges The Industry To Boycott Him. We Hope Some Real Change Takes Place This Time

Here is the thing. Bollywood has had a history of sexual misconduct among a whole lot of other sexist issues. The MeToo movement a few years ago made that extremely clear, while also giving dozens of victims the courage to speak up. The accused were boycotted, their movies were shelved and for the moment it felt like change is underway. That did not last very long since almost all the accused are up and running again and the MeToo movement has died a quiet death after causing a huge uproar for what seemed like five minutes.

The real question here is, how much did those five minutes change? Quite a bit. But problems like these take years to completely clear out. We are getting there but meanwhile, women are still being misbehaved with. Okay, I am not ranting about this because I want to, I am doing it because I am pissed off that the men still think they can do whatever they want and get away with it just because they are prominent personalities.

In her complaints, she also claims that Acharya demanded a fee from her for working in the film industry. Hold on, it gets better (or worse) Divya has also claimed that Acharya and two other women identified as Jayashree Kelkar and Preeti Lad assaulted her at a function held at the Indian Film and Television Choreographers Association (IFTCA).

Interestingly, on Friday itself Acharya defended himself against allegations made by veteran choreographer Saroj Khan who accused him of exploiting his dancers. Let me remind you, this is not the first time Acharya’s name has come up in a sexual misconduct case.

Known as the flag bearer of the MeToo movement in Bollywood, Tanushree Dutta had also accused him and Nana Patekar of misbehaving with her on the sets of Horn Ok Pleasss. Joining the conversation, she urged the entire industry to stay away from Acharya.

She said, “It’s a warning to the film industry to stay the hell away from Ganesh Acharya otherwise your own reputation will be joined to his character. I’m sure many more girls and boys will come out about his misbehaviour and shady business, opening floodgates in the future.”

Men like him think they can get away with just about anything just because they are known in the industry. That is not the case anymore and rightfully so. It should not work like that, every man needs to be held accountable for their actions. Reportedly, Ganesh has harassed so many women and not only should he not be allowed to work but should also face legal consequences for his actions.

Tanushree goes on to say “Even after all the information of fraud, nonpayment of dues, sexual harassment of dancers, bullying and intimidation and even physical abuse of dancers is coming out about Ganesh Acharya in the media, if the actors, directors and producers still work with him, it would mean that they themselves are engaging in such acts also.”

This is really disgusting, and we cannot just sit on information like this. Unlike the MeToo movement, we need to see some actual change. Women trying out their luck in the industry shouldn’t have to live in complete fear of men like him all the time.

We need some action to be taken and we need it now.